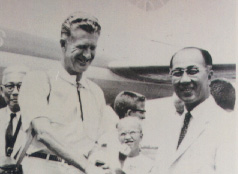 Prof. Thomas H. Evans being welcomed by H.E. Mr. Pote Sarasin, the then Secretary-General of the South-East Asia Treaty Organization, upon his arrival in Bangkok in 1957.

The AIT Community extends deepest sympathy to the family of Prof. Thomas H. Evans, first Dean of the SEATO Graduate School of Engineering. Prof. Evans passed away on 11 January 2000 in the United States.
Looking back...

In the 1950s, high on the region's priority list of engineering needs were water resource development and irrigation. Since Colorado State University was well established in these subjects, it was approached by the United States' International Cooperation Administration (ICA), precursor of the US Agency for International Development (USAID), to make a feasibility and operational survey of a graduate school of engineering. The establishment of such a school was resolved at the SEATO Council of Ministers' meeting in Manila in March 1958.

The responsibility for making the preliminary survey was given to a team led by Thomas H. Evans, Dean of CSU's College of Engineering, and Maurice L. Albertson, Professor of Civil Engineering and Director of the CSU Research Foundation. The two arrived in Bangkok in January 1959. The Survey Team recommended that Hydraulic Engineering be the School's initial field, to be followed by Highway Engineering, Structural Engineering, and Sanitary Engineering.

On SEATO Day on 8 September 1959, the SEATO Graduate School of Engineering was officially opened on the campus of Chulalongkorn University. Two days following its official opening, eighteen students representing three countries (Pakistan, the Philippines and Thailand) began studying Hydraulic Engineering. Under the administration of Dean Evans, a faculty of eight members was charged with the responsibility for developing a broader curriculum, setting up the laboratories and establishing an engineering library in addition to teaching classes, supervising research, and recruiting new students.

Dean Evans was also one of six members of the first Board of Management which was given full power to manage the affairs of the SEATO Graduate School.

During his term, Dean Evans saw the establishment of majors in Highway Engineering and Structural Engineering. He presided over the first graduation ceremony in March 1961 which conferred Master of Engineering degrees on eight students. Dean Evans served the School until June 1961. He subsequently returned to Fort Collins Colorado to resume his duties as Dean of Engineering at CSU. 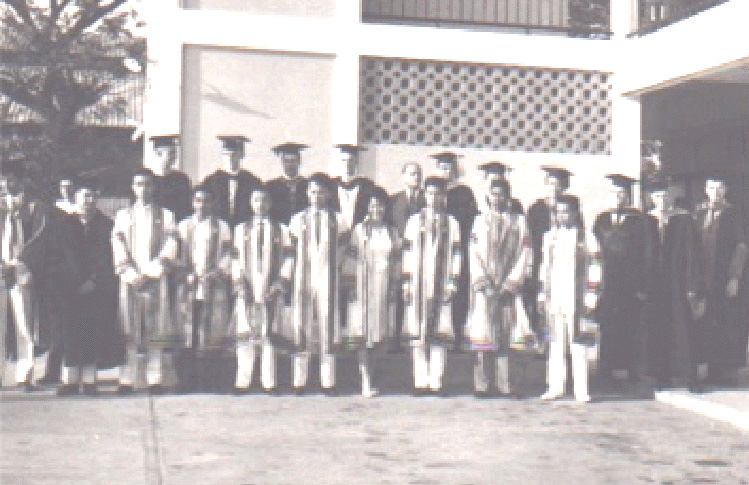 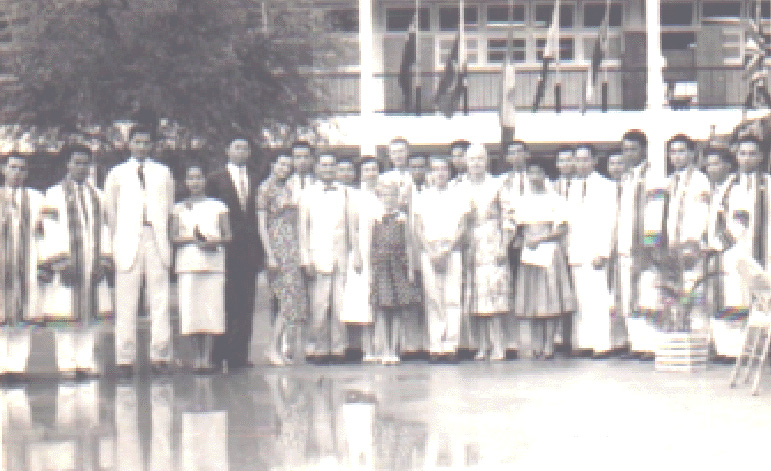 Some students and faculty at the opening ceremony of the SEATO Graduate School on 8 Sept. 1959. Kathy, Mrs. Evans and Tom Evans are in the front row, center. Prof. Evans is in the back row, center.

Writing about their time in Thailand, Tom Evans, recalled the fond memories which he and sister, Kathy, have of Bangkok. They lived here in 1958-1961. Another sister, Sally, was already married and did not join the family here. In a recent letter to Prof. Worsak Kanok-Nukulchai, Dean of the School of Civil Engineering, Tom, wrote, 'We are proud of the fact that your Institute has prospered over these past 40 years.

'I was 12 to 14 years old when we lived in Bangkok. I remember the friendliness of everyone we met; riding anywhere in the city for five Baht and traveling throughout the countryside with Thai friends on the local bus (I particularly liked the ride to Ayuthaya); enjoying activities at the Pramane Grounds on Sunday and watching the Chula kites in flight; meeting the SEATO School students and going to the inaugural graduation ceremony; attending the Thai Boxing matches every Wednesday night with one of our neighbors who worked for the Thai Police Department; watching the long-tailed boats on the Mekong River; and experiencing the neighborhood around Soi Luecha where we lived.

'I wish everyone at AIT well for the future.' 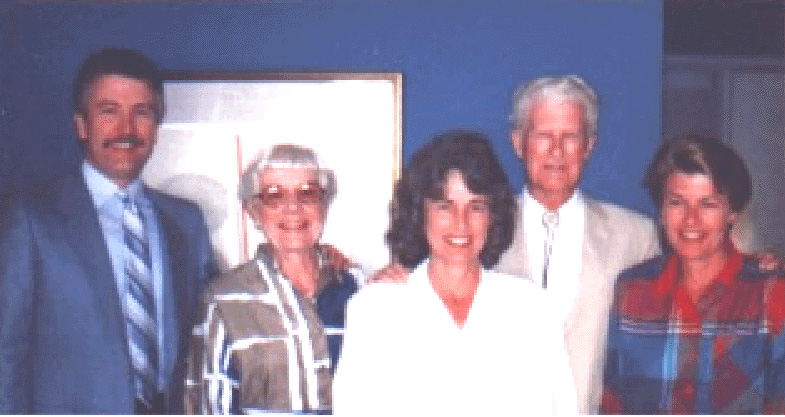 The Evans family in a photo taken a few years ago: From left: Tom, Mrs. Eva Evans (everyone called her Petey), Sally, Prof. Evans, and Kathy.