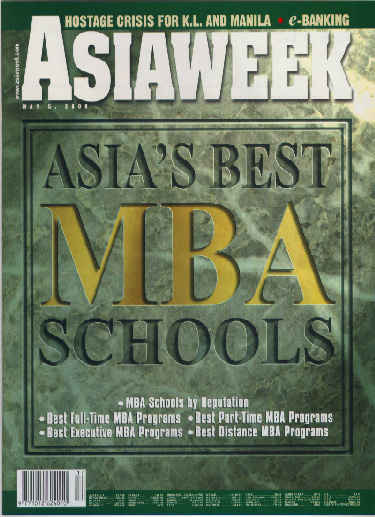 Asiaweek's ranking of MBA schools in the region, an offshoot of the magazine's Asia's Best Universities list which was introduced in 1997, ranked AIT's School of Management as No. 3 for Best Executive MBA, No. 4 for Best Full-Time Program, and No. 14 by reputation. The ranking was published in the May 5 issue of Asiaweek.

The Asiaweek ranking is based on objective measurements like student selectivity, faculty resources and linkages with the business community. Each participating school was asked to rate everyone on the list (but not itself) on a scale of 1 to 5. Eight international MBA schools responded to Asiaweek's request to give ratings, among them INSEAD of France and the Wharton School in the United States. Corporations in Asia - the customer for the products of MBA schools - were polled.

In the belief that an MBA school should prepare students for the workplace and advance their career, the Asiaweek ranking emphasized the business and management background of the faculty (not just their academic degrees), the links that the school maintains with corporations (including the presence of business leaders on its board of trustees or advisers), and the networking possibilities for alumni.

The stories accompanying the rankings focus on how Asia's MBA schools are responding to current management challenges, particularly to the changes driven by the Internet. Because they are more immediately market-driven than undergraduate universities, the region's MBA schools know they have to reinvent themselves in reaction to technology, just as companies do. E-commerce is among SOM's best attended class, with the enrolees reaching 120, exceeding the normal class size of 30 to 40 students.

Says AIT President, Prof. Jean-Louis Armand, 'This well deserved recognition represents an impressive achievement.' Since its opening in 1989, SOM has produced 785 graduates from Asia and other regions. The SOM program offers specializations in the Management of Technology and International Business. Its current enrolment includes students from countries in the European Union--Austria, Belgium, Finland, France, Germany, and Italy.