The AIT Community mourns the passing away on 28 September 2000 of H.E. Mr.
Pote Sarasin, at the age of 95. Mr. Pote, former Prime Minister of Thailand,
was the founding father of the SEATO Graduate School of Engineering, precursor
of the Asian Institute of Technology.

With the late Prof. Milton E. Bender, Jr., the first President of AIT.

Mr. Pote is rightly credited as the initiator of the concept of the
SEATO Graduate School of Engineering and a towering leader of the founders
who brought the idea to fruition. In the autumn of 1957, as the first Secretary-General
of the Southeast Asia Treaty Organization (SEATO), Mr. Pote proposed the
idea of a regional graduate school of engineering to be sponsored by SEATO.
In February 1959, he called for 'maximizing efforts in establishing the
School, to help creating a living example of international cooperation.' 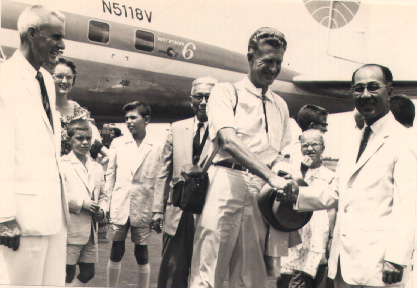 Welcoming the late Prof Thomas Evans, the first Dean of the SEATO Graduate School of Engineering, on his arrival in Bangkok in 1959.

Mr. Pote was born in Bangkok on 25 March 1906 and was educated in the
United States and England. From 1947 to 1951 he was a member of the National
Assembly. In 1948 he came to national prominence as Deputy Foreign Minister.
He was Foreign Minister from 1949-1950, and served as Ambassador to the
United States from 1952-1957. In 1957 he was appointed as the first Secretary-General
of the Southeast Asia Treaty Organization. He served as Interim Prime Minister
for four months in late 1957. In December 1963 he was appointed as Minister
of National Development and as Deputy Premier in March 1969.

Mr. Pote will be remembered by all those who had the privilege to have
known him as an inspirational leader. In this time of bereavement, all
the members of the AIT Community would like to convey their heartfelt sympathy
to Mr. Pote's family and to all those who loved and admired him.