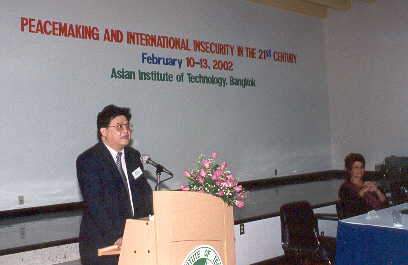 Prof. Mario Tabucanon, Provost, is seen saying his welcome address to the participants.

NGO leaders, academics, activists, and peacemakers from throughout Asia and beyond
met for a working meeting on 'Peacemaking and International Insecurity in the 21st Century'
at AIT, on 10-13 February 2002. It was organized by Santi Pracha Dhamma Institute (SPDI).
Translated into English, SPDI stands for Peace, People (Participatory Democracy), and Justice.

The meeting investigated ways of promoting non-violent conflict resolution in the region. Participants at the meeting have committed to working to help develop a regional non-violent peace team that would be able to act in conflict situations in the region. The meeting was also part of the planning process for Bandung II. The original Bandung meeting, bringing together non-aligned countries of the South, was held in Bandung, Indonesia in 1955. It is proposed that Bandung II be held in 2005.

The meeting was highly successful and many new friendships and alliances were formed. It is certain that the meeting contributed to promoting positive initiatives for greater peace and cooperation in the Southeast Asian region. 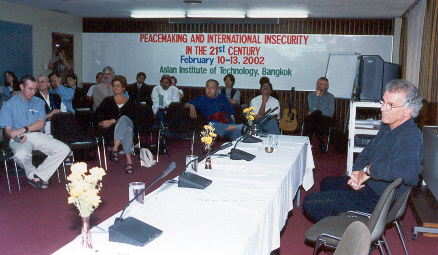 Scene during the meeting discussion. 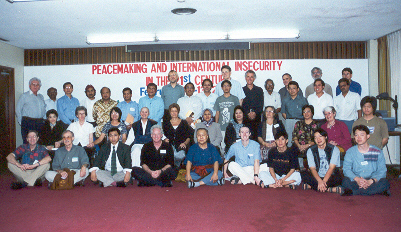 Participants taking a group photo during the last day of the discussion.