Board of Trustees Meeting 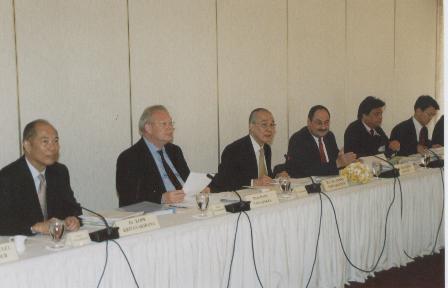 Board of Trustees Meeting

The members of AIT Board of Trustees gathered on May 11, 2004 at AIT for a meeting which was presided over by H.E. Mr. Anand Panyarachun, Chairman of the Board. At the meeting, a warm welcome was extended to all attendees. The Board welcomed the following new trustees as follows: H.E. Mr. Shahed Akhtar, Ambassador of Bangladesh; Professor Voradej Chandrasorn, Secretary General of the Education Council, Ministry of Education, Royal Thai Government who was represented by Dr. Siriporn Bunyananda, Deputy Secretary General of the Education Council; H.E. Mr. J. D. A. Wijewardena, Ambassador of Sri Lanka; and H.E. Mr. Yoon Jee-Joon, Ambassador of Korea who was represented by Mr. Kim Boong-joo, Minister.

The Board approved the reappointment of Mr. Dominique Antoine and H.E. Mr. Jan Axel Nordlander and nomination of Professor Hiroshi Ota, former Ambassador to Thailand, Professor, Kinki University and Director, Japan Forum for Strategic Studies, in replacement of Ambassador Kiyoaki Kikuchi, as members of the Executive Committee.

The nomination of Professor Shinichiro Ohgaki, former Dean of the School of Engineering and currently Professor at the Department of Urban Engineering, University of Tokyo, as a member of the Academic Advisory Panel, in replacement of Professor Hitoshi Nishimura was also approved by the Board.

The Chairman reported the conferment of the Institute's honorary doctorate on Mr. Ratan N. Tata, Chairman of the Tata Group on the occasion of AIT's 100th Graduation Ceremony which took place on 23 April 2004, who following the event has accepted the Board Chair's invitation to serve as a member on the Corporate Relations Panel of the Board. With the Tata Group now embarking on investment plans in Thailand, the Board Chair looks forward to closer cooperation between Mr. Tata and the Tata Group and AIT.