AIT showcases its technological might at AIT Technology Event

The president told the audience that the storied history of AIT is one
of technology and development. Offering numerous examples of how AIT
technology is impacting the region, such as mass transit systems in
Bangkok and around Asia, he stated that AIT aims to reach out more to
industry with its considerable research.

AIT alumnus Mr. Chaovalit Ekabut (’82, Industrial Engineering and
Management) delivered the day’s Keynote Address titled ‘Trends and
Innovations in Building Construction Industry in ASEAN.’ As the Vice
President-Finance and Investment & CFO, SCG and President of SCG
Investment, he spoke of his firm’s vision to be the region’s market
leader by 2015. ASEAN is one of the world’s fastest growing regions,
the former AIT Alumni Association (AITAA) President said, and there are
now tremendous large-scale construction opportunities across the its 10
member countries.

At the same time, he reminded participants of the importance of
environmental sustainability in any business plan, as today’s
sophisticated investors look at both a firm’s profit and its attention
to environmental concerns. Here, SCG was ranked #1 in the world in
2011-2012 for sustainability in building materials, according to the
SAM Ranking from Switzerland, Mr. Chaovalit told the large
audience.

Dr. Pennung Watnitchai of Structural Engineering in AIT’s School of
Engineering and Technology (SET) elaborated on seismic hazard
assessment, and earthquake resistance of various structures. He
mentioned that the growth in height of tall buildings has been
exponential rather than liner, and that diagrid system of buildings,
which is popular in Western Europe may not be suitable for seismic
zones in Asia.

Dr. Noppadol Phien-wej of AIT’s Geotechnical and Earth Resources
Engineering field stated that AIT has done pioneering work on land
subsistency in Thailand. He mentioned the likely impacts of creating of
channel and deep digging in Bangkok, and spoke about the rise in water
table in the subsoil at Chatuchak Park.

Dr. Brahmanand Mohanty, visiting faculty at Energy in AIT’s School of
Environment, Resources and Development (SERD). elaborated on the
concept of zero-energy building and buildings that could have a net
positive impact on the energy balance. Contrasting denser cities with
urban sprawls, Dr. Mohanty also introduced the audience to bioclimatic
architecture; demand controlled ventilation and energy efficient
buildings.

Mr. Gyanendra Sthapit of AIT’s Habitech Center presented the innovative
concept of interlocking bricks, micro concrete roofing and low cost
housing. The Habitech Technology, which was developed at AIT and has
been used in various places in Thailand and abroad was a huge draw for
participants.

Dr. Hamid Mehmood, AIT alumnus and Assistant Professor, Institute of
Space Technology, Pakistan highlighted the use of GIS-based monitoring
and evaluation systems. He mentioned how Remote Sensing was being used
in marketing as well as maintenance in housing colonies.

Dr. Gregory L. F. Chiu of AIT’s Offshore Technology and Management
spoke about developing and implementing risk assessment. Talking about
Yankee Stadium in New York City, Dr. Chiu mentioned how Building
Information Modeling (BIM) was impacting the industry. He highlighted
how changes in knowledge have an influence on professional services, as
he raised the issue of professional license for practicing
professionals in the AEC scenario.

The morning session was chaired by Dr. Jonathan Shaw, Executive
Director, AIT Extension, while the afternoon session was moderated
by Dr. Penning Watnitchai. 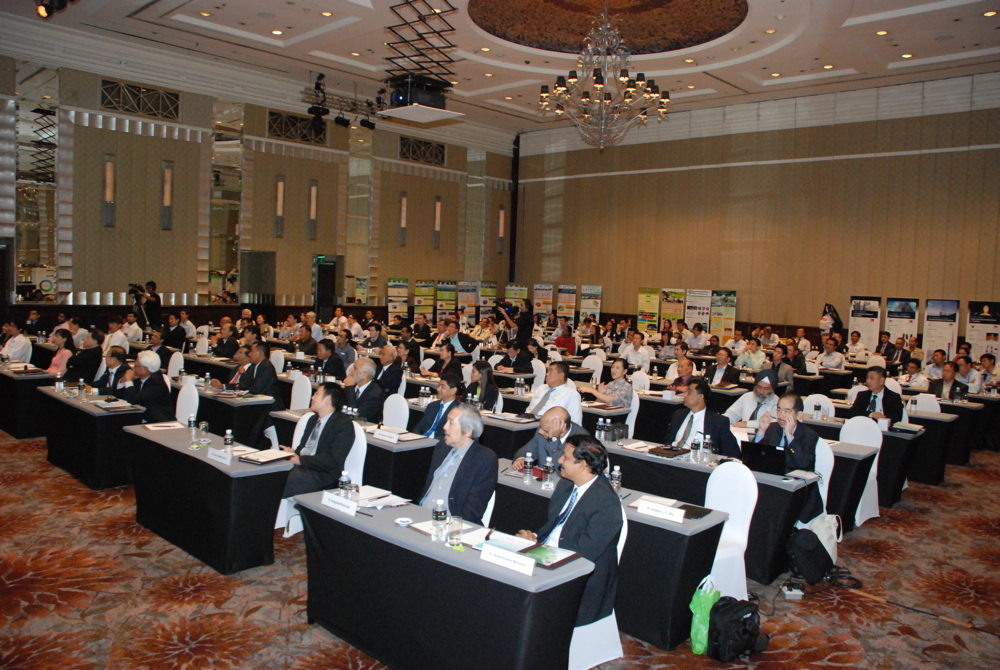