Diplomats, dignitaries and senior bankers from Bangladesh, Sri Lanka
and Thailand on 20 February 2015 graced the formal completion ceremony
of the fourth graduating class of the AIT Professional Master’s in
Banking and Finance Program (PMBF).

Dr. Donyaprueth Krairit, Dean, School of Management, commented of the
special alumni network the graduates enter, and urged the bankers to
maximize the many international contacts they made while studying at
AIT.

The PBMF is a customized professional degree program designed to meet
the needs of the banking sector in the region. Students of the program
are all working executives who study while on a leave of absence. The
program balances theory and practical skills, and students gain by
learning from academics and practicing managers.

“We should all be proud of our young brilliant bankers who have been
chosen by the central banks for this unique program,” said H.E. Ms.
Saida Muna Tasneem, Ambassador of Bangladesh to Thailand.

Ambassador Tasneem recently assumed her diplomatic posting in Bangkok,
and is a member of the AIT Board of Trustees. She was accompanied to
the event by Mr. Azizur Rahman, Counsellor, Embassy of
Bangladesh.

“We are proud of AIT, that it is Asia’s center of excellence in terms
of delivering knowledge and technology to prepare the newest generation
of Asian professionals in every single way to live up to the emerging
challenges of the twenty-first century,” the ambassador said.

Diplomatic Counsellor Mr. CDW Jayawardana attended on behalf of the
Embassy of Sri Lanka in Bangkok. Congratulating his countrymen, he
reminded the audience of the large Sri Lankan study body now at AIT and
of his country’s long history of positive engagement with the
institute.

In his overview of the Bangladesh’s money, capital, insurance and
micro-finance markets, Mr. Ullah noted a number of successes of the
central bank in the implementation of monetary policy and supervision
of the nation’s banks. In its key role, the central bank has
successfully lowered the rate of inflation from double digits to the
6.5--7.5 percent range, Mr. Ullah said.

Bangladesh Bank is now a knowledge-based authority with
across-the-board online automation, IT-infrastructure and inclusive
banking approaches, emphasizing mobile banking, he said. Garments,
which account for over 80% of national earnings, and rice exports are
important sectors for maintaining economic growth in the range of 6%
per annum. Financial remittances of 10 million Bangladeshi workers
abroad have bridged balance of payments gaps, he said.

Mr. Ullah concluded with a call for international lenders to invest in
Bangladesh and benefit from his country’s pro-investment foreign direct
investment (FDI) facilities.

Mr. Perera spoke of the comprehensive regulatory framework in Sri
Lanka and the effective supervision of the Central Bank of Sri Lanka.
Most banks in the country are now well regulated and report strong
balance sheets, he said, and none are making losses.

Importantly, since 2012 all banks in Sri Lanka have been in full
compliance with IFRS – an international accounting language ensuring
worldwide uniformity, he said. Sri Lanka will introduce a new liquidity
ratio in April this year, Perera announced.

In his concluding remarks, he reminded the bankers of the
international diversity at AIT that sets it and the PMBF Program apart.
“At this small ceremony alone, ten nationalities are represented,” Dr.
Venkatesh noted. No other institute has such a multicultural mix that
benefits students in and outside of the classroom, he said. 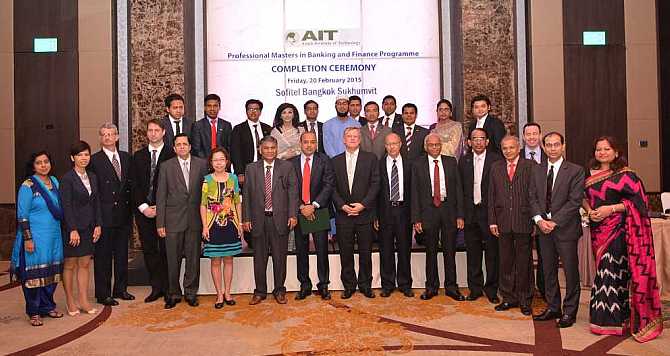