The recently inaugurated dwellings in the Indian Presidential Retreat are powered by AIT technologies. Twelve dwellings in the Presidential Retreat in Dehradun, the capital of the Indian province of Uttarakhand, which were inaugurated by the Indian President H.E. Mr. Pranab Mukherjee, have been constructed using the Onsite Sanitation Integrated Community Housing Technology Innovations developed at the Asian Institute of Technology (AIT).

The 12 dwellings will accommodate officers and staff during the Presidential visits to the Retreat at Dehradun, more popularly known as Ashiana.

An official statement released by the Government of India on the occasion of the inauguration on 10 July 2017, mentioned AIT and elaborated on the technologies driving the project. The press release states that the dwellings comprise of unique blocks known as "compacted intermeshing" blocks which are made from local soil. “The production of these blocks is on site and is an entirely green process. These blocks have novel cavities for horizontal and vertical reinforcement using steel bars which results in eliminating use of the conventional beams, columns and concrete lintel. The cavities also enable natural air curtain against temperature, noise pollution and water penetration. Other salient features of these dwelling units are that they are disaster resilient, sustainable and cost effective. Scientific treatment of sanitation waste enables mitigation of disease risk and ensures health and wellbeing of residents and the community.,” the statement adds.

The official press release by the Government of India can be read here: ait.com/news-and-events/2017/news/ait-technologies-power-recently-inaugurated-dwellings-in-indian-presidential-retreat/

The inauguration was widely reported by the media in India including top media otulets including NDTV, The Indian Express, and public service broadcaster Doordarshan. 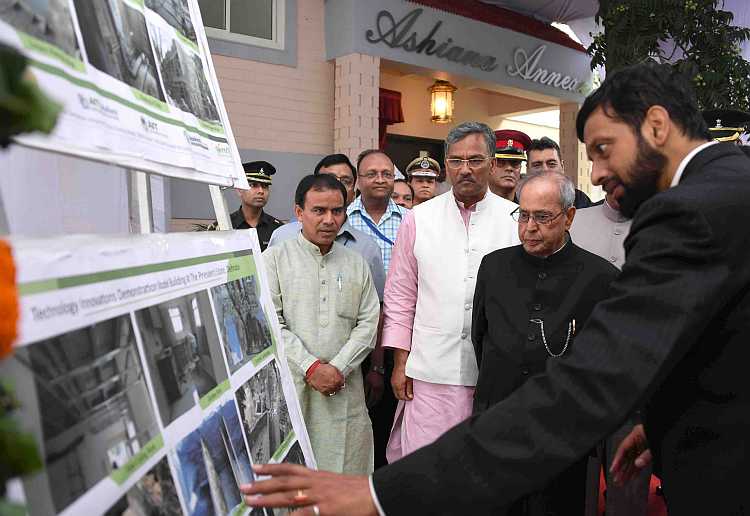