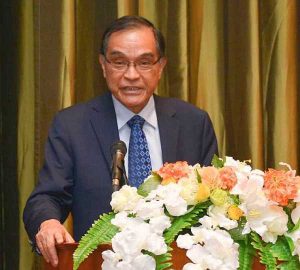 The Belt and Road Initiative (BRI) can unleash three global transformations including the idea of an Asia-Europe supercontinent, emergency of neo-renaissance and a massive upsurge in cultural communications. Further, BRI is an attempt by China to redefine the meaning of a powerful nation. Stating this, Prof. Feng Da-Hsuan, Director of Global Affairs and Special Advisor to Rector of University of Macau (UMacau) stated that with the BRI, China can reinvent itself and make the world a better place for generations to come.

Delivering the AIT Public Lecture 2017 on "Supercontinent, Neo-Renaissance, and Cultural Communication: Millennium Mindset Transformation induced by the Belt and Road Initiative," Prof. Feng began by shattering the myths of continental boundaries. “The separation of Asia and Europe is artificial,” Prof. Feng said, adding that though the delineation is deep-rooted, BRI can break this mindset. The emergence of a supercontinent aided by connectivity facilitated by BRI would then induce a neo-renaissance, he added.

“While Europe as a continent induced the renaissance, if Asia and Europe were to becomea supercontinent, it can induce a neo-renaissance,” he said. Basking in the supercontinent mindset will certainly nurture a completely unprecedented and completely new culture, Prof. Feng opined. A new generation of Descartes, Copernicus, and Francis Bacon will appear, he added. 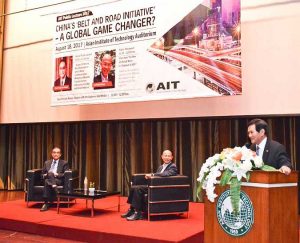 Mentioning that in the past 16 years, China has constructed 20,000 kilometers of high-speed rail, he stated that high-speed rail is becoming ubiquitous in East Asia and Europe.

While the twenty-first century has been constructed by transformations of the twentieth century, this century has to confront many challenges and these include hatred, population explosion, global warming, global economic tsunami, poverty, ignorance, disease, clean water, and energy.

These challenges and transformations will need a fresh impetus to cultural communications. “China’s biggest problem is cultural communications, and to ensure the success of BRI, China must increase its understanding of political economic and cultural environment of at least some if not all of the nations and regions along with way,” Prof. Feng said. Contrasting with India, he stated that the emergence of India is positions of importance in the United States stems from their ability to understand the American culture. He also suggested that both China and India need to work together to solve global problems.

Speaking about the high-speed railway, Prof. Feng stated that the leadership in Thailand made a geopolitical decision in preferring the initiative from China. “The world needs to learn from Thailand, and Thailand could be a shining example of how to interact with China,” he added.

Moderating the discussion was Suthichai Yoon, Chairman of the Nation Multimedia Group, who critiqued the presentation, and invited the audience to join the discussion. Asserting that he was not representing the government or any organization from China, Prof. Feng fielded questions on whether the leadership in China is ready for cultural communications. “The outside world has had no time to adjust to the growth in China, and this is true even in China,” Prof. Feng added. The biggest challenge in China is the last 20 years is not scientific or economic, but an issue of mindset, which Prof. Feng hoped would change with BRI.

Earlier, Dr. Subin Pinkayan, Chairman, AIT Board of Trustees, welcomed Prof. Feng and Suthichai. AIT President Prof. Worsak Kanok-Nukulchai, while thanking the panelists stated that this would count among the best AIT Public Lectures organized by AIT over the past two decades. Shawn Kelly, Director, Office of External Relations, AIT was the host of the event. 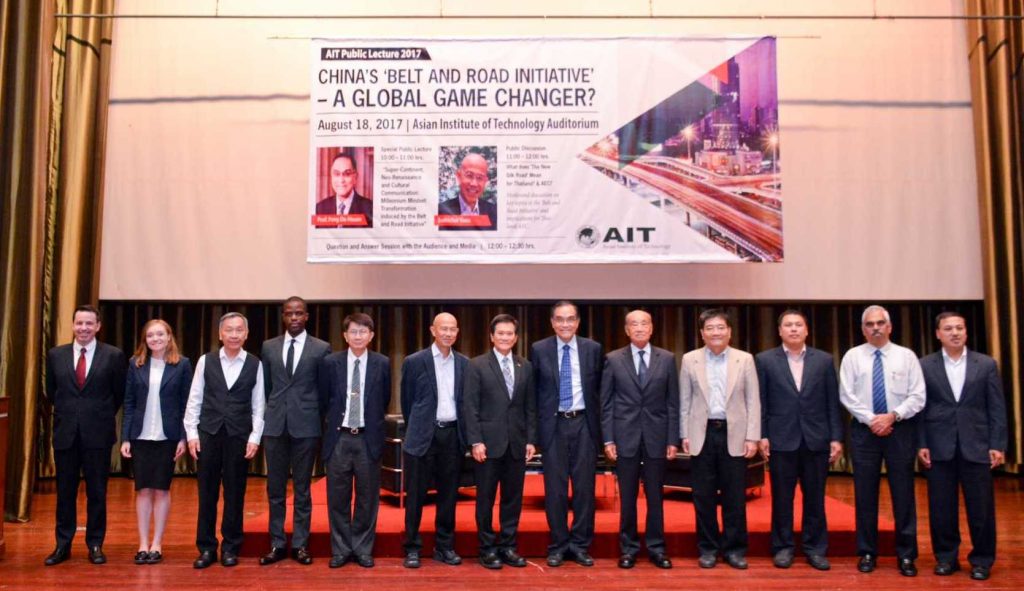