For the visually impaired, a colorful app to explore the world

The next time you spot the visually impaired struggle with colors, inform them about a mobile app that can help overcome this challenge. Also, inform them about an innovation of a young Master’s student of Computer Science and Information Management (CSIM) who has developed this app. Inform them about Punchaya Raksasakul, and do tell them about the Asian Institute of Technology (AIT). 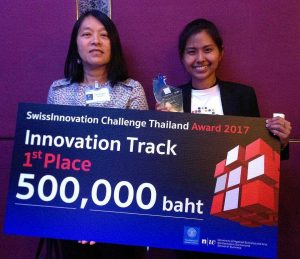 “What can you do to help the visually impaired identify different colors?” was a question Punchaya was asked by Visut Pongsoon, the secretary of the Blind Association of Thailand.  The question provoked her to explore various options, and like many students who embark on a path to discovery, she walked up to her faculty supervisor Dr. Vatcharaporn Esichaikul. Over the next few sessions, an idea blossomed which would lead Punchaya towards a solution.

A recipient of the His Majesty King’s Scholarship at AIT, she selected her Master’s thesis topic as “Color identification mobile application for visually impaired and integration of haptic and auditory sensation.” As the research progressed, she started working on creating a mobile application.

The solution was simple. As Punchaya explains: “Point the mobile camera towards a particular color and let the camera decode the color.” To communicate the color, the camera would vibrate with each pattern of vibration being unique and distinct. The visually impaired person holding the mobile would feel the vibration, and the pattern of vibration would help them identify the color, she adds. The mobile app began with the identification of primary and secondary colors, and also by distinguishing dark and light colors.

“The combination of the haptic and auditory feedback is what makes
this mobile app different from others,” says Dr. Vatcharaporn. She also guided Punchaya to go beyond creating the app and encouraged her to participate in the newly launched Swiss Innovation Thailand challenge.

The competition was tough, but an undeterred Punchaya competed against 60 entries during rigorous three rounds spread across a nine-month period to reach the finals. In the finals, there were nine teams, but Punchaya triumphed winning the inaugural Swiss Innovation Challenge Thailand 2017 challenge which fetched her 500,000 THB,  and the opportunity to represent Thailand in Switzerland.

But the young AIT student is not restricting herself to laurels. To facilitate the visually impaired, she is creating three mobile-based games to add an element of fun. The first game is about matching colors, while the second delves with color mixing. As users play the game, they simultaneously sharpen their kinesthetic skills. Finally, there is a game that helps decode the colors in a currency note. This is a challenge, Punchaya says, as she explains how the identification of colors can help the visually impaired distinguish between various currency notes.

But solving challenges is what this Information Management student loves.