Pakistan Ambassador for expansion of cooperation with AIT

Ambassador of Pakistan to Thailand, H.E. Mr. Asim Iftikhar Ahmad has desired an expansion of cooperation between Pakistan and the Asian Institute of Technology (AIT). Speaking to AIT official on his visit to the Institute on 8 November 2017,  the Ambassador stated that the partnership can be revitalized based on both the historical context as well as mutual benefit. 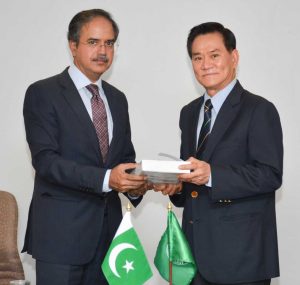 Welcomed at AIT by President Worsak Kanok-Nukulchai, the Ambassador solicited suggestions to enhance the quality of engagement with AIT and stated that he would personally engage with key Pakistan institutions, particularly the Higher Education Commission (HEC) to ensure that the interaction with AIT increases.

Noting the period of crisis faced by AIT due to the unprecedented floods in 2011, the ambassador appreciated the efforts of the AIT President in taking AIT back to its “known and well-acclaimed levels.”

The visiting delegation from the Embassy, which included Kamran Kamran Dhangal, Third Secretary, was informed that by virtue of being a member of the South East Asia Treaty Organization (SEATO), Pakistan was among the founding members of AIT.  Twelve distinguished Pakistani nationals have served on the AIT Board of Trustees since 1968.