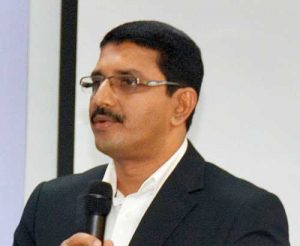 Dr Krishna R Salin has been promoted to the rank of Associate Professor in AIT’s School of Environment, Resources and Development (SERD). His promotion was announced by AIT President Prof. Worsak Kanok-Nukulchai on 6 December 2017 following the recommendations of the Faculty Evaluation Panel (FEP) and the SERD Professorial Board.

Dr. Salin obtained his Bachelor’s degree in Fisheries Science from Kerala Agricultural University in 1994 and Master’s of Fisheries Science in Aquaculture in 1997. He obtained his Ph.D. in Mariculture from the Central Institute of Fisheries Education (CIFE), Deemed University, India in 2004. He conducted his post doctoral research, and was appointed as a Visiting Fellow at the Queensland University of Technology, Brisbane, Australia in 2009 and 2013, respectively.