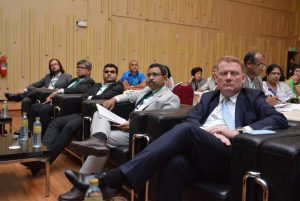 Mainstreaming Resilience and Disaster Risk Reduction in Education” organized at the Asian Institute of Technology (AIT) on 1-2 December 2017.

Disasters, risk and resilience need to be brought into curriculum at various levels of education, and different disciplines should integrated them within the education system. This was the dominant theme of the two-day conference on “Mainstreaming Resilience and Disaster Risk Reduction in Education” organized at the Asian Institute of Technology (AIT) on 1-2 December 2017.

Delivering the opening remark, Mr. Bernard Philip, Deputy Head of Mission, Embassy of Australia to Thailand spoke about the importance of concerted global action by the civil society, academia and the private sector in tackling emerging challenges. Speaking about Pacific Island countries, Mr. Bernard Philip stated that people in the region had suffered two of the largest cyclones in recorded history. Elaborating on the recently released Australia's Foreign Policy White Paper, he mentioned that Australia is dedicating a significant portion of aid to promote growth and stability. “Institutions like AIT can play a role in building connections and strengthening partnerships,” he added.

In his keynote address, Mr. Sanjay Srivastava of UNESCAP spoke about key areas of research for mainstreaming Disaster Risk Reduction (DRR), and mentioned the substantial contribution in this field from AIT. Prof. Iyyanki Murali Krishna of Defence Research and Development Organisation (DRDO) stressed the importance of data and the emergence of Artificial Intelligence (AI) and the Internet of Things (IoT) in tackling disasters and their aftermath. Dr. Gajendran Thayapan of University of Newcastle elaborated on positioning disaster management in higher education.

An overview of Disaster Resilience Education Capacity Building in South-East Asia (DRECB) was provided by Dr. Jason von Meding of the University of Newcastle. Dr. Indrajit Pal stated that the aim of the two-day conference was to integrate the Sustainable Development Goals (SDGs), Integrating SDG, the Sendai Framework for Disaster Risk Reduction  and the UNFCCC Paris Agreement. He elaborated on DRECB, which was supported by the Australian-ASEAN Council (AAC) and is aimed at understanding challenges emerging from natural hazards and human-induced threats as building capacity in the ASEAN region.

Mainstreaming Resilience and Disaster Risk Reduction in Education” organized at the Asian Institute of Technology (AIT) held on 1-2 December 2017.