'Gender, Technology and Development' Journal now partners with the publisher Taylor and Francis 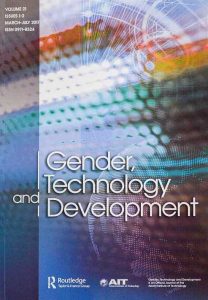 The AIT-hosted journal “Gender, Technology and Development (GTD)” has now completed two decades of impactful and scholarly work. The latest issue of the journal has just hit the shelves as it celebrates twenty years of existence. Marking this commemoration, this is the first issue produced under a new partnership with the publisher Taylor and Francis which has a wide global distribution.

“Looking forward” and “Looking back” is how the associate editors and AIT faculty, Prof. Kyoko Kusakabe, Dr. Philippe Doneys and Dr. Joyee S. Chatterjee, describe the journey in their editorial on this occasion. The editorial traces the history of the publication, and how it coincided with the launch of the regions first program on gender and development studies.  As they note, over the life of the journal in the past twenty years, the very “terms ‘gender’, ‘technology, and ‘development’ have undergone drastic changes,”.  The publication has witnessed major global developments and its impact on the academic field, and reflected and contributed to our understanding of the same.  Whether it was the Fourth World Conference on Women in Beijing or the Asian Economic Crisis; or be it issues like climate change and natural disasters or ethnic conflicts and humanitarian crises, the 311 articles in the journal had them covered and analyzed.

The latest copy of the anniversary journal was presented to AIT President Prof. Worsak Kanok-Nukulchai, who congratulated GTD and its editors in reaching this important milestone. "We are proud of GTD's contribution to cutting edge scholarship in the field and for its continued role in enhancing the research capacity and visibility of the Institute as an international peer-reviewed publication. I join you in celebrating this achievement and the new partnership with Taylor and Francis which shall expand the journal's global presence," President Worsak remarked.

As development paradigms change, the journal too is charting new territory. Embracing topics that traverse shifting definitions and questions of gender, technology and development, the current publication showcases how subjects ranging from robotics, mobile internet, wage inequality, carbon emissions and migration — all form an integral part of GTD.

During these times, the journal has published articles by eminent academics such as Sandra Harding and Nina Lykke and been associated with global luminaries like Nobel laureate Prof. Amartya Sen, Prof. Naila Kabeer, Prof. James Scott and Prof. Dorothy E. Smith (as members of the Advisory Board) amongst others. Hosted by AIT, the GTD journal is now included in the Emerging Sources Citation Index, and from 2017 being published by Taylor & Francis. The international editorial board has Joy Clancy of University of Twente (The Netherlands), Yukari Sawada of Tokyo University of Foreign Studies (Japan), and Rebecca J. Elmhirst of University of Brighton (UK) as co-editors. Three of the four associate editors are from AIT — namely Prof. Kyoko Kusakabe, Dr. Philippe Doneys, and Dr. Joyee S Chatterjee; while the fourth associate editor Dr. Bernadette P. Resurrección serves at the the Stockholm Environment Institute, and was formerly an Associate Professor at AIT. The first issue published by Taylor and Francis (Routledge) is a double issue. The AIT community has complimentary on-campus access to the journal.