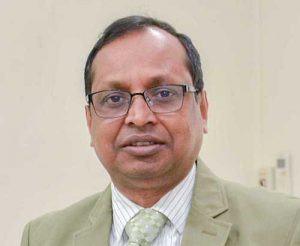 Dr. Manzul Kumar Hazarika has assumed charge as Director of AIT’s Geoinformatics Center (GIC). He takes over from Dr. Lal Samarakoon.who served as Director of GIC for 14 years.

The announcement was made by AIT President Prof. Worsak Kanok-Nukulchai in an email sent to the AIT community on 12 January 2018.

Dr. Hazarika will be responsible for coordination and administrative responsibilities of GIC. Prior to assuming this position, he was serving as Director (Project Operations) at GIC. A graduate from Jawaharlal Nehru Krishi Vishwavidyalaya, Jabalpur, India (Agricultural Engineering, 1989); Dr. Hazarika holds a Master’s from IIT Kharagpur (Soil and Water Conservation Engineering, 1990) and AIT (Remote Sensing and GIS, 1997). He obtained his Ph.D. from the University of Tokyo (Civil Engineering, 2003). He has been serving in AIT since December 2003.

In his message, Prof. Worsak thanked the Japan Aerospace Exploration Agency (JAXA) for having seconded Dr. Lal to AIT.