Among the pioneers who left their home countries and moved to Asia in the second half of the twentieth century to work towards the cause of higher education were a galaxy of leaders who arrived at Thailand. And within few decades they had achieved what was then considered a dream —  creating an international level postgraduate institute in the region.

The foundation stone of this international institution was laid by Prof. Milton E. Bender Junior, who was joined by a score of faculty members. Among them was Prof. Robert B Banks, who assumed charge of Director of Research. A few years later, Prof. Banks was named as President of what was then called the SEATO Graduate School of Engineering.

In the February of 2018, the Institute that he nurtured and cherished recalled his contributions, as it dedicated the AIT Conference Center Auditorium in memory of the late President.

In a ceremony held on 20 February 2018, Chairperson of AIT Board of Trustees, Dr. Subin Pinkayan and President of AIT, Prof. Worsak Kanok-Nukulchai stood on the stage, and by the press of a button unveiled the plaque which proudly said: “Robert B Banks Auditorium.”

“It is very humbling that his name and legacy is being preserved,” his son Erik Banks remarked via a video message. “My father would often reflect that that the period of time represented the pinnacle of his academic and professional career,” Erik said.

Alongside him was his mother Mrs. Gunta Banks, who reminisced her stay at the Institute. Keeping in touch with the Institute via email and social media, she described the changes and additions at AIT as “amazing,” as she thanked President Worsak and the AIT Board of Trustees for bestowing this honor.

Prior to the dedication ceremony, Dr. Subin Pinkayan recalled the role played by the United States in founding the Institute, as well as the long-term relationship enjoyed by the Colorado State University and SEATO Graduate School of Engineering, and its successor AIT.

Delivering the dedication remarks, President Worsak recalled that Prof. Banks served as President from January 1977-July 1983. After spending his youth in Kansas and California, and after attending the University of Wichita for two years, he served in the US Navy following which he returned to studies. Prof. Banks received his Bachelor’s and Master’s degrees in Civil and Environmental Engineering from Northwestern University, and a doctorate in environmental engineering from University of California , Berkeley. After completing his postdoctoral work as a Fulbright College at Imperial College, London, he commenced a 40-year career in the academia. In 1976, he accepted the position of Provost and Vice President at AIT, and a year later he was appointed  President.

“Prof. Banks is remembered for the important contributions that he made in the growth and development of AIT,” Prof. Worsak remarked. His major contributions include the expansion of  academic programs, wider involvement of donor countries, increase in faculty strength, and improvement of infrastructure. “He set a solid foundation for the next 25 years,” President Worsak said. 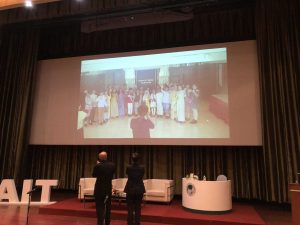 Dr Subin Pinkayan and Prof. Worsak Kanok-Nukulchai press the button to unveil the plaque dedicating the auditorium to late President Robert B Banks.

Remembering him was Prof. Alastair North who mentioned that “Bob Banks,” as he was fondly addressed by his friends, pushed the Institute way up on the development curve. Recounting the numerous achievements of Prof. Banks, Prof. North recalled that Prof. Banks skillfully created an atmosphere of international cooperation at AIT. “We would not be what we are today but for Professors Bender and Banks,” he summarized.

The dedication ceremony was followed by the Milton E. Bender Jr. Lecture, which was delivered by Dr. Adrian Ray Chamberlain who spoke on “SEATO - GSE/ AIT – Beginnings and Visions for the Future.” The audience was treated to a visual presentation of activities of Prof. Banks, as well as a video message from the Banks family. Highlights of the events were the virtual remote-controlled unveiling of the plaque in honor of Prof. Banks as well as a group of children from the AIT International School who performed before the distinguished audience.

Children from various nationalities studying at the AIT International School at the inauguration of the Robert B Banks Auditorium.