Canada for enhanced cooperation with AIT 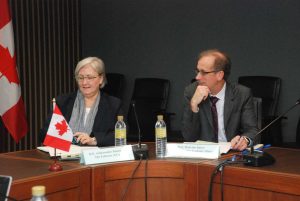 Canadian universities can look towards an increased academic and research collaboration with the Asian Institute of Technology (AIT), as the country enhances its engagement in the ASEAN region. Recent governmental initiatives, which include encouraging Canadian students to travel abroad, as well as a concerted focus on gender components in all programs can unlock numerous possibilities for collaboration between AIT and Canadian universities. These were the remarks of H.E. Mrs. Donica Pottie, Ambassador of Canada to Thailand, during her visit to AIT on 26 March 2018.

Interacting with AIT officials, Prof. Butler revealed that in percentage terms, Saint Mary’s University is regarded as among the top two universities in Canada in terms of internationalization. He mentioned three strategic themes that underpin the University -- research and innovation, intercultural learning, and sustainability. “As our university seeks to expand our graduate education, possibilities of partnership with AIT are immense,” he added. Prof. Butler also spoke of environmental sciences, data analytics and computing, summer exchange programs, and dual degree programs as possible area of collaboration.

AIT President Prof. Worsak Kanok-Nukulchai highlighted the role of AIT as an international platform for cooperation, adding that the Institute looks forward to developing newer programs with Canadian universities. Thanking the Canadian Ambassador for her initiative, the AIT President added that dual degree programs would be an ideal way to embark on a new partnership. He added that AIT has conducted summer programs for international students, and it will be happy to host Canadian students at AIT. Prof. Worsak also suggested that Canadian faculty members could utilize AIT as a entry point to the ASEAN region.

See also:  Canada keen to turn a page, and rejuvenate linkage with AIT