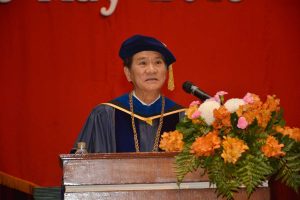 Innovations and disruptions will trigger intense periods of social, cultural and economic changes never encountered in the history of mankind posing a potential threat to our present educational system. In order to remain useful and survive, all universities must start preparing for a world that not been seen before in the history of mankind. Exhorting students to recognize the constant integration of disruptive technologies in everyday life, AIT President, Professor Worsak Kanok-Nukulchai asked everyone to engage in lifelong learning beyond the traditional school days.

In this scenario, the Darwinian adage of “Survival of the fittest” may well give way to “Survival of the Best Adaptable,” Professor Worsak remarked. While the impact of the previous technological revolutions like the agricultural, industrial and digital revolutions took more than a generation to be realized, disruptions in the future will be abrupt and exponential in both time and magnitude. Delivering the graduation address at the 129th Graduation of the Asian Institute of Technology (AIT) on 18 May 2018, Professor Worsak posited whether AIT should expand the student population target from conventional younger age segment to population of all ages.

Traversing the six-year journey of AIT from being devastated by two metres of flood waters in 2011 to the inauguration of the modernized AIT library and other landmarks under the Royal patronage in April 2018, Prof Worsak mentioned that the graduating students have been witnesses of a part of the AIT Renaissance. 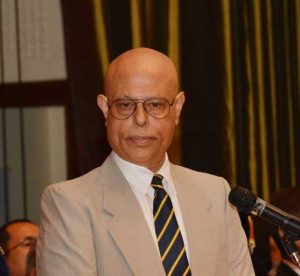 Delivering his graduation address (morning session), Professor Gautam Dasgupta, Professor, Civil Engineering and Engineering Mechanics, Columbia University, stated that  “AIT’s education is definitely aimed at making a whole person.” In this digital age, Institutes of Technology can only survive as universal venues of applied sciences and designs, he remarked as he exhorted upon graduands to take the Hippocratic Oath just like medical professionals and swear never to employ technology to harm others.

Professor Dasgupta described AIT President Prof. Worsak Kanok-Nukulchai as a visionary leader and a very good researcher, adding that he has rescued AIT from both natural and financial disasters.“It only confirms that only the best academics can be best  university administrators.,” Professor Dasgupta added. 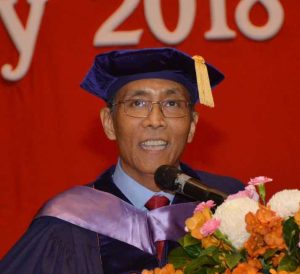 Delivering the prominent alumnus speech (morning session), Professor Soe W. Myint, Professor, School of Geographical Sciences and Urban Planning, Arizona State University quoted two stories to impart important life lessons. Quoting the famous “marshmallow test” conducted at Stanford University in the 1960s, Professor Myint suggested the need to be patient stating that “Don’t eat marshmallow yet” adage applies to anybody at any age. He exhorted upon graduands to focus on the important aspects of life including one’s family, partner, health, hopes and dreams. 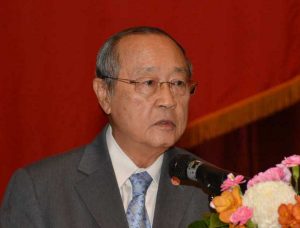 Delivering the graduation address (afternoon session), Dr. Sumet Tantivejkul, Secretary General, Chaipattana Foundation, Thailand stressed the significance of sustainable living. We need to share the world’s responsibility, natural resources, and global commons, Dr. Sumet remarked. Stating that the Malthusian theory of population versus food supply has been averted due to the green revolution, he mentioned that the unsustainable impacts of the green revolution as he stressed the need to follow the Sustainable Development Goals (SDGs). Highlighting the principles of sufficiency economy enunciated by late HM King Bhumibol Adulyadej, Dr. Sumet stressed upon the three principles of moderation, reasonableness and self-immunity, along with the two conditions of knowledge and morality. 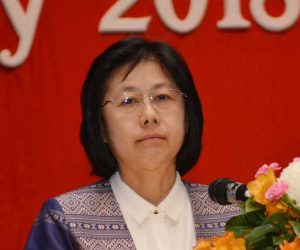 Delivering the prominent alumna address (afternoon Session),  Ms. Areewan Haorangsi, Secretary General,  Asia-Pacific Telecommunity (APT), Thailand highlighted the role played by APT in serving the needs of people. She asked graduands to focus on working as a team player, and asked them to ensure that due credit is given to everyone who contributes towards a goal. Sincerity and credibility are two important factors in life, she said, as she spoke of the need to consider both obstacles and failures as challenges and lessons, and remain undetected in their pursuit.

Four-hundred and sixty students hailing from 21 countries received their degrees at the 129th graduation. The largest cohort of graduating students came from Sri Lanka (128), followed by Thailand (93) and Myanmar (80). Three continents, Asia, Africa and Europe were represented by the graduating students.

Messages were delivered by Mr. Haoran Zhang and Ms. Thitiya Panichvejsunti on behalf of doctoral graduating students, and by Ms. Su Pyae Sone  and Mr. Bhavin Pradhan on behalf of graduating master’s students.

Two faculty members each were conferred distinguished teaching awards (Dr. Tanujjal Bora of Nanotechnology for less than 15 students category, and  Dr. Kunnawee Kanitpong of Transportation Engineering in the category of 15 or more students) and research awards (Dr. P. Abdul Salam of Energy in the Senior Research Leader and Dr. Avishek Datta of Agricultural Systems Engineering in the Junior category). Dr ATM Nurul Amin was conferred a certificate upon his appointment as Professor Emeritus.Twenty-seven students were honored with graduation prizes for outstanding achievements.

Intermission numbers during the graduation ceremony were provided by students of the AIT International School.

Prof. Sivanappan Kumar, Vice President for Academic Affairs was the Master of Ceremonies.  Dr. P. Abdul Salam, Chair, Academic Senate presented the decisions of the Senate to the assembly. Deans of the respective schools, Prof. Voratas Kachitvichyanukul of School of Engineering and Technology (SET); Prof. Rajendra Kumar Shrestha of School of Environment, Resources and Development (SERD); and Prof. Lawrence S. Abeln of School of Management (SOM) presented their respective graduates.