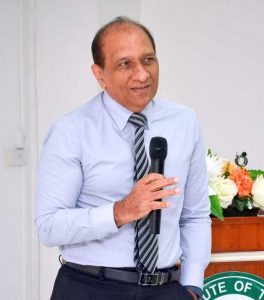 Naveed Anwar, Executive Director, AIT Solutions at the inauguration of the AIT-Tiger Leong International Innovation and Leadership Camp on 16 July 2018.

Twenty-seven students from 13 countries joined the third edition of the AIT-Tiger Leong International Innovation and Leadership Camp which began on 16 July 2018 at the Asian Institute of Technology (AIT). With over a hundred applicants, participation in the camp has become increasingly competitive, with only one in four applicants emerging successful.

“It is encouraging to see how the idea of an international innovation and leadership camp has progressed,” remarked Dr. Naveed Anwar, Executive Director of AIT Solutions. The first batch of participants became brand ambassadors of our camp, and since then it has flourished with interested students applying from as far as North and South America, Dr. Naveed said.

Welcoming them was AIT President Prof. Worsak Kanok-Nukulchai, who had envisioned the camp as a training ground for global leaders. “AIT is a neutral platform, and we seek to produce global leaders,” Prof. Worsak told the participants. We also work on issues that no single country can solve on its own, he said, adding that participants should utilize this opportunity to create friendships and networks from all over the globe. The AIT President also asked students to focus on development of seven key skills — collaboration, communication, critical thinking, creativity, problem solving skills, IT skills and numeracy.

Introducing AIT was Shawn Kelly, Director of Office of External Relations, AIT.
With the sponsor Tiger Leong unable to attend the event, his message was delivered by Sanjeev Jayasinghe, Director, Office of Advancement. Ms. Rakdao Pakdisi of AIT Solutions was the event host.

The genesis of the camp lies in support from alumnus Tiger Leong, who wanted to create a platform at his alma mater to help young students benefit from AIT’s global reach and expertise. Tiger Leong, who is the President, Ellipse Enterprise, Malaysia, graduated with a Master’s in Geotechnical and Transportation Engineering in 1992.

Passionate about the camp, the 27 enthusiasts expressed their keen desire to create a global network of young professionals, while using AIT as a hub of their activities. The program will conclude on 24 July, and it will be followed by another event by AIT Solutions called Innovation Market Place.

Participants at the AIT-Tiger Leong International Innovation and Leadership Camp which began at the Asian Institute of Technology (AIT) on 16 July 2018.