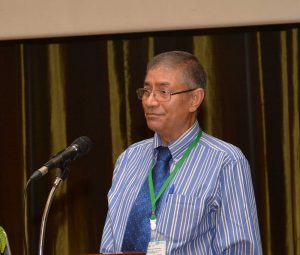 Prof. Ganesh Shivakoti at the International Association for the Study of the Commons (IASC) Asian Region Binnennia, at AIT on 13 July 2018.

The Asian Institute of Technology (AIT) hosted  the International Association for the Study of the Commons (IASC) Asian Region meeting from 13-16 July 2018, where leading academics and practitioners deliberated on issues related to governance of key natural resources.

“The Asia Region biennial meeting is being held after a gap of 14 years, and after the first meeting held in Chiang Mai (Thailand) in 2004, it is AIT that is now hosting the second meeting,” said Prof. Ganesh Shivakoti, Director of the Ostrom Center for the Advanced Study of Natural Resources Governance (OCeAN), which is hosted at AIT’s School of Environment, Resources and Development. Speaking at the inaugural meeting, Prof. Shivakoti reminisced the contributions of Nobel laureate late Elinor Ostrom, after whom the OCeAN Center is named.

Welcoming the delegates was AIT President Prof. Worsak Kanok-Nukulchai, who cited the similarities between IASC and AIT.  IASC works for “the commons”, and so does AIT, Prof. Worsak said. He added that AIT’s research work is targeted at “the commons” and as the institute focuses on conducting research that is beneficial to mankind.“AIT is also a unique institution in many ways and long before internationality became a buzzword, our founding fathers had fashioned AIT as an international institute for education,” Prof. Worsak said.

Three themes were the focus of the event -- climate change, natural resources dynamics and land use challenges, community irrigation and robustness challenges, and community forestry and social ecological systems.

Delivering the keynote speech, Prof. John Pulhin of the University of the Philippines at Los Banos, spoke about integrating the commons, as he delineated key challenges and opportunities of governance in a changing climate. Describing ecosystems as complex, dynamic and interacting, Prof. Pulhin stressed the importance of collaboration in a fragmented landscape.

The plenary session discussed the Nepal Irrigation Institutions and Systems and the application of common pool resource research tools, and decided to test it for the Asian Irrigation Institutions and Systems. The second plenary session was focused on a Toyota funded Project on Policy-Practice gap on Triple Benefits from REDD+ Implementation Mechanism  in Southeast Asian countries. Deliberations at AIT were followed by a field trip to the Tha Wang Sai Community Forest in Nakhon Ratchasima Province, Northeastern Thailand.

International Association for the Study of the Commons (IASC) Asian Region Binnennial from 13-16 July 2018 at the Asian Institute of Technology (AIT).