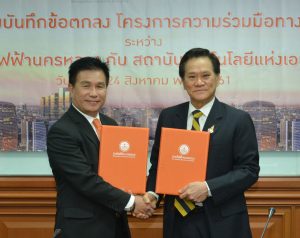 Metropolitan Electricity Authority (MEA) of Thailand will depute 24 students to AIT to pursue higher education in the fields of energy and information and communication technologies. This will include five master’s and one doctoral student every year during the next four years.

This follows the signing of an agreement between Mr. Chaiyong Puapongsakorn, MEA Governor  and Prof. Worsak Kanok-Nukulchai, President of the Asian Institute of Technology (AIT). The agreement, which was signed on 24 August 2018 at the MEA headquarters in Bangkok, provides for academic studies and research collaboration.

Mr. Chaiyong Puapongsakorn stated that that AIT is a reputed international institute in Thailand in the field of engineering, science, and energy, and the agreement is aimed at developing the competency of MEA employees. He mentioned that the new emergence of new technologies will alter the way we serve people, and it is important that employees are aware of the latest developments in their fields. While MEA staff will learn new technologies, AIT will gain from the real-life experiences of our employees.