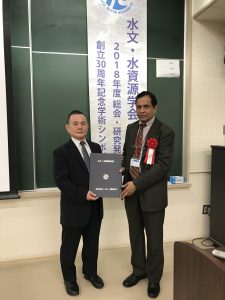 Professor Mukand Singh Babel of Water Engineering and Management has been honored with the Japan Society of Hydrology and Water Resources (JSHWR) International Award. He was bestowed this honor by Professor Tsugihiro Watanabe, President of JSHWR at the general assembly meeting of the Society held on 13 September 2018 at Mie University, Tsu City, Mie, Japan.

The event coincided with the 30th anniversary of the founding of JSHWR, and concurrent with the holding of a symposium titled “Beyond 2020 - Future of Water Management, Water Business, and Water Research.”

While the Society was created in 1988, the award was instituted in 1994. JSHWR works on creative research in new technologies, guiding research on the development and application of new technologies, with emphasis on international exchange and cooperation. It honors a foreign water expert with the international award for significant contributions to progress in hydrology and water resources. A critical criterion of the award is the extent of collaboration of the awardee with various institutions and stakeholders in Japan.

Receiving the award, Prof Babel stated that the award has re-invigorated him to work harder, and with greater passion. In his speech, Prof. Babel highlighted three aspects of futuristic research. “The days of conducting research in ‘silos’ was over, we must be prepared to keep an open mind and entertain ideas that are outside our comfort zone “Prof. Babel said. Secondly, modern action research needs to be bottom-up as opposed to the conventional top-down approach. Thirdly, new challenges will require blue sky thinking, which in-turn will translate into previously unheard of philosophies to address complex water problems, he added. 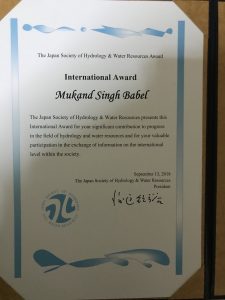 Prior to Prof. Babel, Prof. Ashim Das Gupta (now Professor Emeritus at AIT) was honored with this international award in 2004 (Link ).