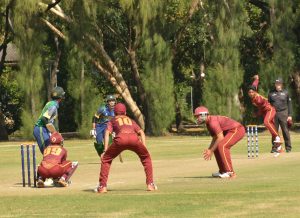 Match between Saudi Arabia and Qatar at AIT cricket grounds.

The cricket grounds at the Asian Institute of Technology (AIT) once again hosted an international cricket tournament with six teams playing seven matches under the Under-19 Cricket World Cup tournament organized by the International Cricket Council (ICC).

From 7-17 December 2018, the lush AIT cricket grounds hosted teams from Bhutan, Hong Kong, Oman, Qatar, Saudi Arabia, and Thailand, reaffirming the status of AIT as a top venue for ICC matches in Thailand.

The Under-19 tournament is held every two years, and the cities of Bangkok and Chiang Mai were the venues for the 2018 edition of the tournament held in Thailand. Only two playgrounds in Bangkok, the Terdthai Cricket Ground and AIT were selected to hold cricket matches. Besides five matches, AIT Cricket Grounds was also the venue of the first semi-final where Oman defeated Hong Kong (16 December), as well as the third place playoff where Hong Kong defeated Qatar (17 December).

The two winning teams from Thailand (Oman and Kuwait) will now participate in the U19 World Cup to be held in South Africa in 2020. “The ICC U19 Cricket World Cup has always held an important place in the global cricket world as it often provides the first chance for the best young cricketers to shine on the world stage in a major international competition, “ said an official release by the ICC.

AIT has been hosting cricket tournaments for ICC on a regular basis. It had hosted the eight-nation 2010 Asian Cricket Council (ACC) Trophy Challenge championships in December 2010; while in December 2015, it was home to the Women’s World Twenty20 Qualifier 2015 matches. In 2016, Thailand became the first country to organize a live broadcast of Women’s Asia Cricket, thanks to the Women’s Asia Cup Twenty20 tournament played from 25 November-4 December 2016 held at AIT.