Department of National Parks, Wildlife, and Plant Conservation and AIT collaborate on a pilot project for Khao Yai National Park 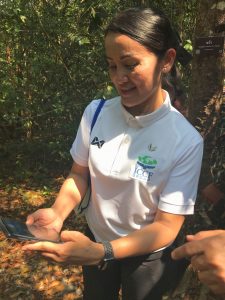 A visitor from the International Conservation Caucus Foundation tests the the app developed by AIT.

The UNESCO World Heritage Site of Khao Yai implemented a pilot project in collaboration with the Asian Institute of Technology (AIT) and the Department of National Parks, Wildlife, and Plant Conservation (DNP) to develop a mobile app integrated with low-energy Bluetooth beacon technology. The app will aid visitors during their sojourn by providing them with context-aware information about various aspects of the sites they are visiting.

“If you are on a walking trail, the app will inform you of details that are relevant to your hike. On the other hand, if you are more interested in the flora or the fauna, then the app will provide with similar tailor-made information,” reveals Dr. Naveed Anwar, Executive Director, AIT Solutions, who is spearheading the project.

Dr. Naveed unveiled the pilot at the inauguration of the 200-year commemorative US-Thai Friendship Trail organized at the Park on 9 February 2019, where General Surasak Karnjanarat, Thailand’s Minister of Natural Resources and Environment and Mr. Peter Haymond, Chargé d'Affaires, Embassy of the United States jointly inaugurated the commemorative trail.

While AIT is developing the app, the solar-powered beacons have been developed by a team led by Prof. James She, Director of the Social Media Lab, Hong Kong University of Science and Technology (HKUST), with content provided by Park officials.

“We will offer our users offline navigation that will ensure that the app functions even in the absence of cellular networks or with weak signals,” says Amir Izhar, who, along with his colleague Punchaya Raksasakul, is working on developing the app. The information is contextual, and it can even issue warning signals if a user ventures off-track. Users can also install offline maps, and other add-ons are being envisaged. With the battery life of a beacon ranging from 3 to 5 years and each matchbox-sized beacon having a range of 70-300 meters, the hardware is not only long-lasting but also portable.