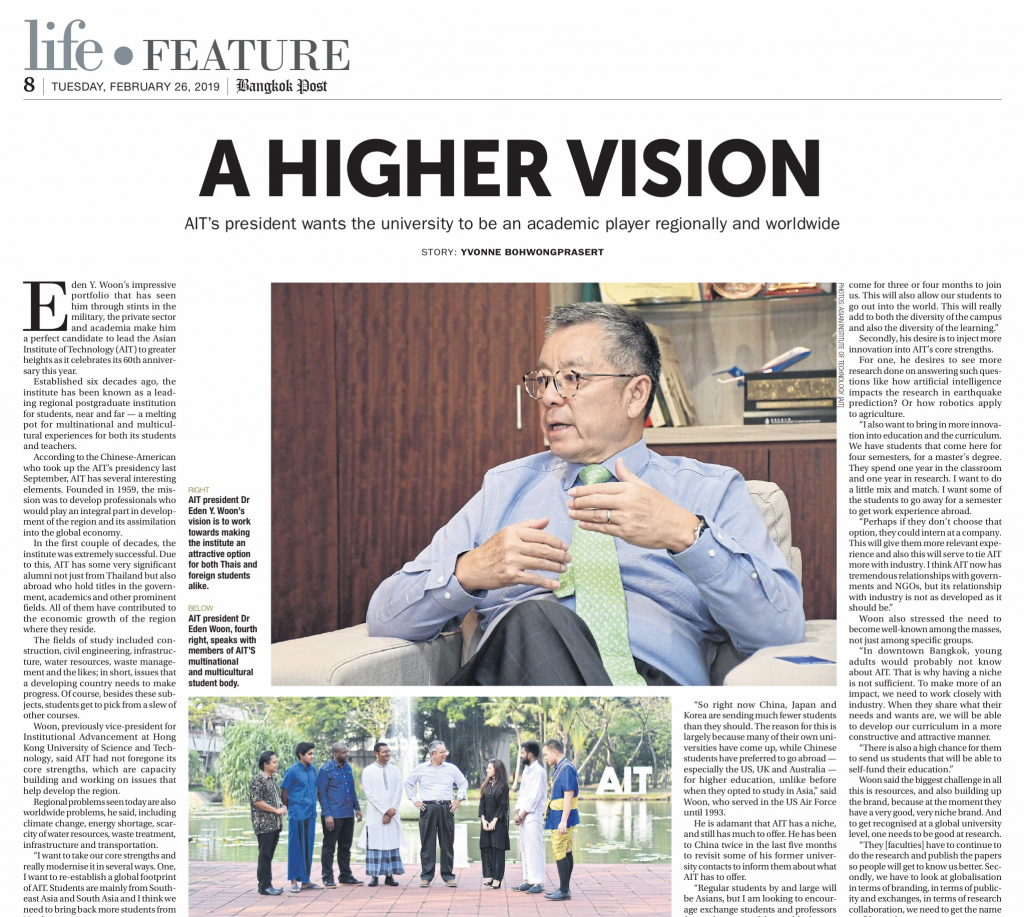 Scanned Copy of the Interview of AIT President Dr Eden Y Woon in The Bangkok Post.

"A Higher Vision" is the title of the interview of AIT President Dr. Eden Y Woon in the Bangkok Post published today (26 February 2019).

The interview can be read at this link:

It is also reproduced here:

AIT's president wants the university to be an academic player regionally and worldwide.

Eden Y. Woon's impressive portfolio that has seen him through stints in the military, the private sector and academia make him a perfect candidate to lead the Asian Institute of Technology (AIT) to greater...

Established six decades ago, the institute has been known as a leading regional postgraduate institution for students, near and far -- a melting pot for multinational and multicultural experiences for both its students and teachers.

According to the Chinese-American who took up the AIT's presidency last September, AIT has several interesting elements. Founded in 1959, the mission was to develop professionals who would play an integral part in development of the region and its assimilation into the global economy.

In the first couple of decades, the institute was extremely successful. Due to this, AIT has some very significant alumni not just from Thailand but also abroad who hold titles in the government, academics and other prominent fields. All of them have contributed to the economic growth of the region where they reside.

The fields of study included construction, civil engineering, infrastructure, water resources, waste management and the likes; in short, issues that a developing country needs to make progress. Of course, besides these subjects, students get to pick from a slew of other courses.

Woon, previously vice-president for Institutional Advancement at Hong Kong University of Science and Technology, said AIT had not foregone its core strengths, which are capacity building and on issues that help develop the region. Regional problems seen today are also worldwide problems, he said, including climate change, energy shortage, scarcity of water resources, waste treatment, infrastructure and transportation.

"I want to take our core strengths and really modernise it in several ways. One, I want to re-establish a global footprint of AIT. Students are mainly from Southeast Asia and South Asia and I think we need to bring back more students from North Asia.

"So right now China, Japan and Korea are sending much fewer students than they should. The reason for this is largely because many of their own universities have come up, while Chinese students have preferred to go abroad -- especially the US, UK and Australia -- for higher education, unlike before when they opted to study in Asia," said Woon, who served in the US Air Force until 1993.

He is adamant that AIT has a niche, and still has much to offer. He has been to China twice in the last five months to revisit some of his former university contacts to inform them about what AIT has to offer.

Secondly, his desire is to inject more innovation into AIT's core strengths.

For one, he desires to see more research done on answering such questions like how artificial intelligence impacts the research in earthquake prediction? Or how robotics apply to agriculture.

"Perhaps if they don't choose that option, they could intern at a company. This will give them more relevant experience and also this will serve to tie AIT more with industry. I think AIT now has tremendous relationships with governments and NGOs, but its relationship with industry is not as developed as it should be."

Woon also stressed the need to become well-known among the masses, not just among specific groups.

"In downtown Bangkok, young adults would probably not know about AIT. That is why having a niche is not sufficient. To make more of an impact, we need to work closely with industry. When they share what their needs and wants are, we will be able to develop our curriculum in a more constructive and attractive manner.

"There is also a high chance for them to send us students that will be able to self-fund their education."

Woon said the biggest challenge in all this is resources, and also building up the brand, because at the moment they have a very good, very niche brand. And to get recognised at a global university level, one needs to be good at research.

"They [faculties] have to continue to do the research and publish the papers so people will get to know us better. Secondly, we have to look at globalisation in terms of branding, in terms of publicity and exchanges, in terms of research collaboration, we need to get the name out," he said.