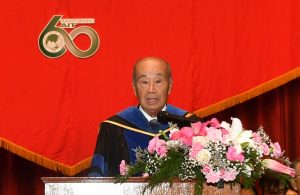 For someone who joined the first batch of students of AIT’s precursor, the SEATO Graduate School of Engineering in 1959, the life journey of Dr. Subin Pinkayan, Chair of the AIT Board of Trustees, has been intertwined with that of the Institute itself. Delivering the graduation address to students on December 13, 2019 as part of what President Eden Y. Woon described as the “final punctuation mark in the 60th-anniversary celebrations,” Dr. Subin narrated the story of his 85 years as he gets ready to step down from AIT’s Board Chair in January next year. Dr Woon added that there is no more fitting person than Dr Subin to be the distinguished speaker at this last graduation exercise of the 60th Anniversary.

“I am indebted to AIT, and I have always tried to give back to the Institute,” Dr. Subin said, as he recounted how AIT had provided him with a scholarship to complete his Master’s, opened the vistas of international education, helped him to travel to France and then the United States to pursue his PhD, and also gave him a teaching career. “This is not just my story but the story of 24,000 alumni spread across 100 countries,” he said. AIT is a very special place, and its internationality is unique, Dr. Subin added.

Offering lessons to graduating students, Dr. Subin asked them to dream big because “if you have no dreams, big things never happen. But dreams are useless unless they are accompanied by action.” Do not hesitate to be a pioneer, do your best, never blame yourself, and learn from the past while looking towards the future. Do not work alone but seek help from friends, and do not seek all glory for yourself, but use the win-win approach – were the mantras he offered the students.

The Board Chair concluded by stating that he is proud that as the Institute charts its future course of “transforming AIT” under President Woon, it remains committed to the development of Asia. President Woon has taken over AIT’s presidency at this importance juncture, and he has embarked on key strategies designed to take AIT to its next level. I am proud that AIT is transforming itself under its new motto of “Social Impact with Innovation,” Dr. Subin said. 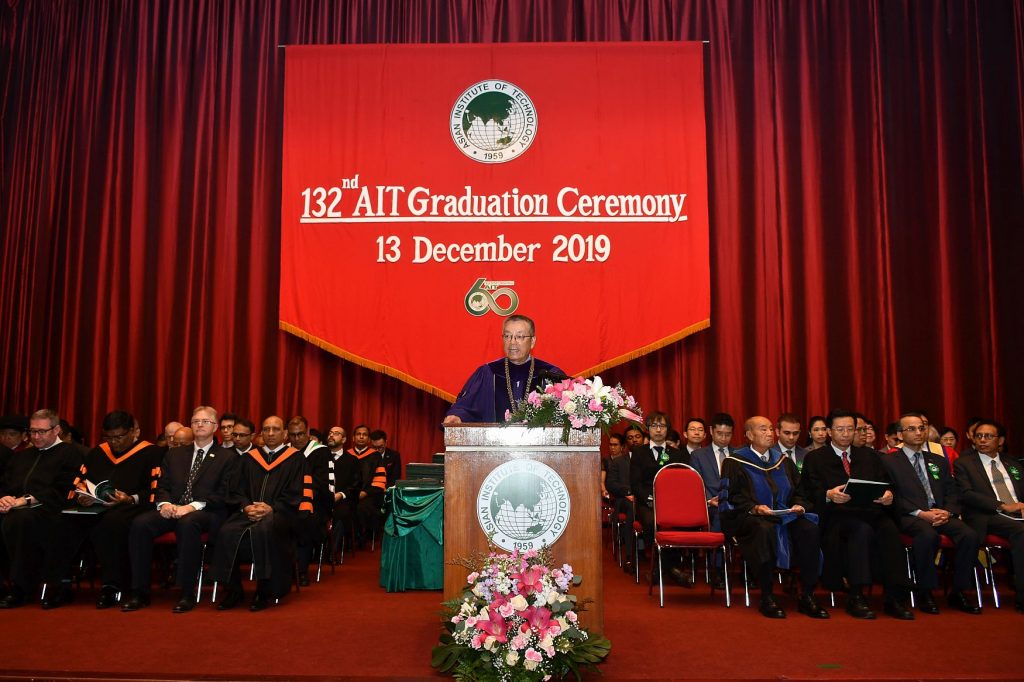 President Woon stated that the graduation exercise effectively ends AIT’s 60th-anniversary celebrations. During this year, AIT has hosted many distinguished speakers and organized many seminars, lectures, and conferences. It has seen a new leadership take over and signed numerous agreements with prestigious universities and companies. AIT has a new roadmap for transforming itself. It has established the AIT AI Center and the AIT Entrepreneurship Center and opened the Belt & Road Research Center. With 2020 upon us, the Academic Senate has approved numerous measures providing our students with more opportunities for innovative and experiential learning. “You have had a front-row seat in a very important year in AIT’s history – both from a legacy standpoint and from a future transformation standpoint,” Dr. Woon remarked.

President Woon cautioned students that they were entering an uncertain world where humanity faces numerous challenges emerging from technology, an environmental train-wreck, geopolitical conflicts and confrontations, disruption of harmonious societies by social media, and rapid changes in the new knowledge needed simply to keep up. “Just as we transform AIT, your transformation must be continuous and forward-looking,” he stressed. 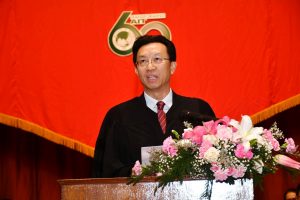 Delivering the prominent alumni speech was Mr. Hong Bo Chen, COO, Tus-Holdings Co. Ltd., and Deputy Director, Tsinghua University Science Park (TusPark). Mr. Chen, who graduated from AIT in 1992, spoke about his experience of managing the world’s largest innovation park, stressing the importance and role of science parks and incubators in supporting hi-tech companies. Speaking of the role AIT played in his career, Mr. Chen said: “Every time I attend a conference, I will make a special mention of the fact that I graduated from AIT, because it was AIT that provided me with an opportunity to understand different international cultures, and it gave me self-confidence.” Stating that a key reason why China has managed to increase its per capita GDP from 300 USD in 1991 to 10,000 USD today, is the role played by hi-tech companies. No fewer than 15,000 new companies are being established daily in China, which implies that 10 companies are set up every minute. However, the success rate of hi-tech companies is only five percent, he added. He complimented AIT for establishing the Entrepreneurship Center, calling it a “far-seeing decision,” and adding that he is in talks with people in the AIT Entrepreneurship Center to commence cooperation very soon.

AIT’s 132nd graduation ceremony saw the award of PhD degrees to 26 students, Master’s to 183, Diplomas to five, and Bachelor’s to five more. Graduating students came from 20 countries from four continents – Asia, Europe, Oceania, and South America. Prof. Deepak Sharma, Vice President of Academic Affairs led the graduation ceremony, while Dr. P. Abdul Salam presented the decisions of the Academic Senate to the President for the award of degrees. Ms. Kwanhatai Thongpalad of the School of Environment, Resources, and Development (SERD) also delivered a speech on behalf of graduating students.