Interview: Overseas Students Give the Thumbs Up to AIT’s Organizational Quarantine

During the ongoing Covid-19 pandemic, any person who qualifies to enter Thailand must undergo a 14-day period of self-quarantine. Since September 2020, AIT has been accommodating incoming overseas students’ entry into the country at its official Organizational Quarantine (OQ) facility. As of 1 January 2021, 143 students had taken advantage of the OQ. The Gazette spoke to some students about their experiences.

Mr. Quentin Andres, a master’s student from France, defined the AIT OQ as a necessary ‘helper’ because without the facility, it would have been much harder for him to travel from his country to AIT. The OQ provided him a feeling of security knowing that there was a place to stay for quarantine upon entry to Thailand. Although he was all alone in his OQ room and could not go anywhere during that period, it still helped him to adapt to the campus little by little, he explained. “During my quarantine time, I followed my study program – the Aquaculture and Aquatic Resources Management (AARM) at the School of Environment, Resources and Development – online. Meanwhile, it was quiet, and I had more time to find new activities such as learning the Thai language by myself in my room. I believe that the OQ is very safe because AIT does not allow any unsafe situation, and I was monitored very carefully by the OQ staff from the beginning until the end,” Mr. Andreas said.

Mr. Dipesh Poudel, a Nepali MBA student in the School of Management (SOM), was impressed with the food served during his time in the OQ. “The food was fresh, and every day there was something new to eat. I would actually wait for the next meal to come as soon as I was done with one meal. I also felt thankful to the staff. They were really helpful and supportive when I needed something,” he said. Mr. Poudel commented about the 7-day self-isolation period following the 14-day quarantine in OQ. “It was good. I finally got a chance to explore AIT a bit after two long weeks of waiting. The environment is really amazing, and I was thrilled to see all the beautiful places inside the campus. The only thing that concerned me was that I had a limited time of 1 hour and 30 minutes to do necessary errands by myself, and sometimes it was such a rush to get everything done within that time. But I am really happy with my overall stay at the AIT OQ and the self-isolation process.”

Ms. Wanni Zhang, a master’s student from China who entered AIT's Environmental Engineering Management Program in the Fall 2020 semester, said that even though COVID-19 is like a dark cloud covering the whole earth, it could never stop her yearning for AIT. “After five months of unremitting efforts, I finally arrived here in November, flying over the snow fields and rain forests.  AIT showed us the greatest patience and care after picking us up at the airport. I will never forget the sweat-soaked protective clothing and gentle words of the OQ staff when I carried my luggage at 2 a.m. At that moment, I realized that AIT would be my second home.” 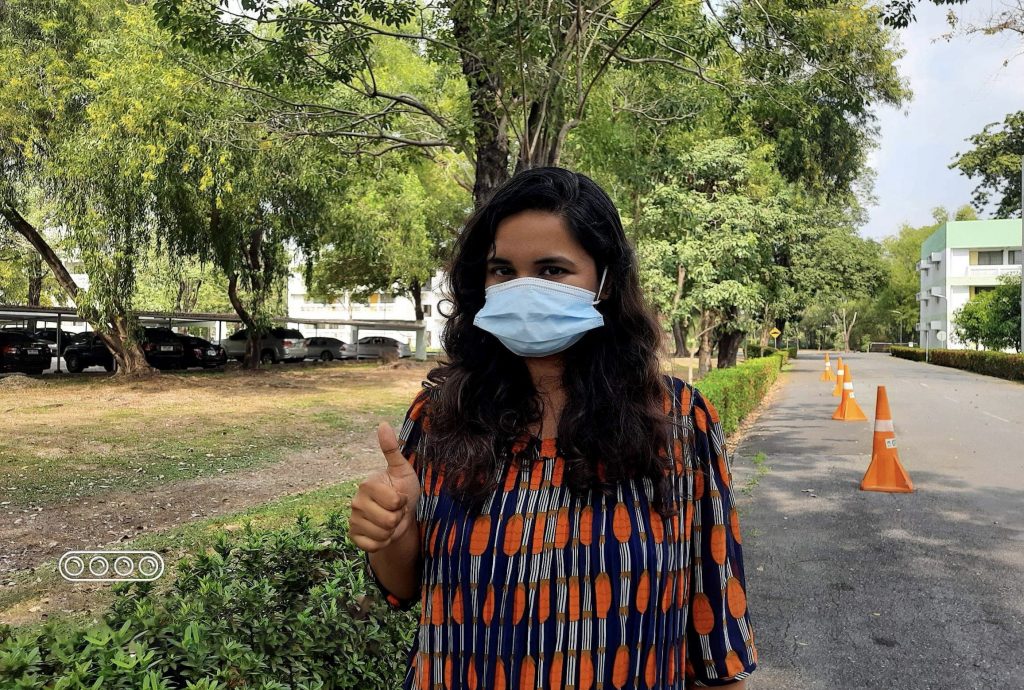 Ms. Kuntala Chowdhury flew from Bangladesh to pursue a Master’s degree in the Gender and Development Studies program at the School of Environment, Resources and Development. She said the OQ was very helpful for her because she would not have been able to bear the cost of the other types of quarantine facilities available in Thailand. “The OQ life was not that pleasant for me as I had never been confined to a single room in my life before. The room was quite small and so we could not move properly when we became bored. However, the OQ system in AIT is very safe because they monitor everything via CCTV video cameras and protect us from being contaminated. Though I did not love staying in quarantine, the OQ system in AIT is completely safe.”

Ms. Rong Gao, a Chinese master's student of the Business Analysis and Digital Transformation Program entered AIT during the Fall 2020 Semester. “From July to November, I was preparing for the visa. I did not arrive at AIT until November 25th, and I was quarantined in the OQ for 14 days. It was a very complicated process, but the result was good! During the isolation of quarantine, and due to the fact that I just arrived in Thailand, I did not adapt to the diet very well. Fortunately, with the active help of the OQ personnel, I was able to complete my isolation in a healthy and happy way. For this, I would like to express my gratitude to them all,” she said.

Mr. Arun Kanchan, an Indian student in the Climate Change and Sustainable Development program said the AIT OQ experience was like a “tour package” where transport and accommodation was pre-arranged.  Knowing that AIT was taking full responsibility for his well-being once he landed in Bangkok helped to alleviate stress during that phase of the journey, he said. “When one embarks on international travel, every bit of support helps tremendously. The orientation sessions conducted over Zoom with our department head and with the School Dean and Admissions Office prepared me well. The OQ is an absolute necessity for the incoming students and the rest of the campus – it is a simple and practical step to protect ourselves and others at this critical juncture,” Mr. Kanchan said. “I liked the fact that I could focus on assignments and exams during my time in the OQ – there were no distractions.  Teaching methods evolved, and professors and students adapted to the new normal.  The OQ facility team was particularly sensitive to our needs – special dietary requests were met to the best of their ability, and the Office of Student Affairs kept the human connection intact.”

Mr. Richard Deverson Andrew Selemani, a doctoral student of management at the AIT School of Management who hails from Malawi in Africa, took us back to the time before he arrived at AIT.  He was studying online, as it was impossible to travel to Thailand at that time since airline companies suspended all air travel due to COVID-19. The airlines began operating in September 2020, which gave him an opportunity to travel to Thailand. He arrived at AIT on 19 October 2020. He believes it is great for the institute to have its own quarantine facility. “It has been helpful because most students decided to come to AIT once it was announced that the Thai Government had approved AIT to have its own OQ. It is inside the institute, which makes it convenient for students to study easily while observing the quarantine rules. It helps that the students are examined by the doctors from Thammasat University Hospital during 14-days of quarantine, before going into self-isolation for a further seven days and then eventually being integrated into the AIT campus. There are many benefits from undergoing quarantine at the AIT facility. The AIT OQ is less expensive than Alternative State Quarantine (ASQ) facilities in Thailand, and I liked many things in the OQ room such as access to the internet, and the pack for tea, coffee, sugar, and cream,” Mr. Selemani said.

Zheng Li, a Chinese doctoral student of Environmental Engineering and Management said: “As we reach the end of the year, looking back at 2020 – it was a challenging and unforgettable year. For me, being able to study abroad this year doesn’t seem very real right now. But with the coordination of AIT and many other departments, I arrived in Bangkok successfully. Completing fourteen days of OQ life, although boring, I could see and experience the warmth brought by AIT. The experience also made it easier to adapt to the new environment. Now that I am out of quarantine and ready to start a new life, I hope that the coming 2021 will usher in springtime for the world.”