On March 4, 2021, AIT and iGroup signed a Memorandum of Understanding (MoU) and Memorandum of Agreement (MoA) to strengthen and foster the long term collaboration between the two organizations. In his opening remarks, AIT President Dr. Eden Woon welcomed and thanked Mr. Pote Narittakurn, also known as Mr. Lee, and his team for their continuous support. He added that with this signing, AIT could further achieve bigger things with iGroup by way of more integrated collaboration.

iGroup (Asia Pacific Limited) was founded by Mr. Lee in 1984. Mr. Lee graduated from AIT in 1974 with a Master’s in Engineering in Water Resources Engineering. The objective of this MoU is to strengthen the collaboration between AIT and iGroup in academics, executive training and education, and fostering the greater use of digital technologies in education. Similarly, the MoA will provide a strong framework for implementing projects using digital platforms at AIT International School (AITIS), starting with a computer coding platform ‘BSD’ -- Build Something Different. 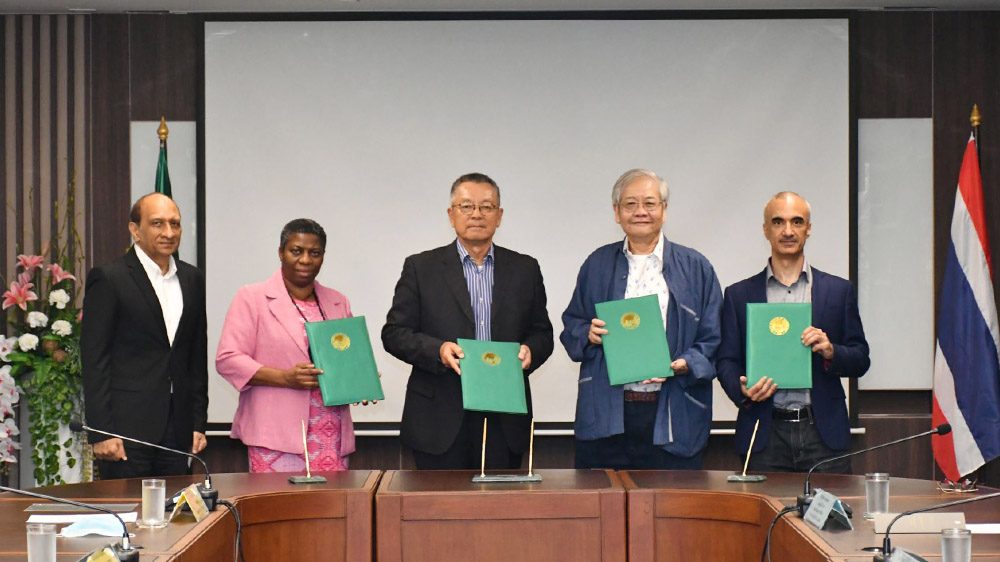 In this light, Mr. Lee remarked, “I am always excited to be part of AIT. This BSD program in Asia and the world is important for kids.” Stressing the need and importance of professional skills as the development of non-degree programs seems to be gaining more popularity, he further added “I am very keen to work with AIT Extension to explore such programs”.

On this note, Dr. Naveed Anwar, AIT Vice President of Knowledge Transfer, shared his views on several initiatives being undertaken together with iGroup, and mentioned that the BSD program looks very promising at this time. More would be further explored, expanded, and scaled up under the newly signed MoU umbrella, added Dr. Anwar.

Mr. Russell Rein, AIT Vice President of Administration thanked Mr. Lee and his team and said, “AITIS is the first school in Thailand and the region to embrace this BSD program. The program has had a positive impact on students, with students mentioning that this opportunity has made them better critical thinkers.”

Concluding the signing ceremony, President Woon remarked, “Continuing education, executive education, training, and workshop are very important as education becomes obsolete fast. Three important things that AIT is doing are STEM education in the elementary school at AITIS, online education to compliment residential education, as well as focusing on executive education. This matches with the philosophy and business model of Mr. Lee. AIT is excited to explore more together after this signing”.

Joining the informal session, Ms. Phyo Thiri Win, a grade 6 student at AIT International School mentioned she had a great learning experience with BSD online. She shared that she used HTML, CSS, and JavaScript to create games, websites, and many more projects.