AIT Student Union (SU) joined global forces in challenging menstruation stigma, as part of the ‘Choose to Challenge’ campaign for the 2021 International Women’s Day. Introducing a special campaign ‘Menstruation is NOT taboo,’ the SU is providing free sanitary pads in women restrooms around the campus for the entire month of March.

While many countries have taken actions to improve gender equality, it is still an unfortunate fact that in many parts of the world, the talk of ‘period’ is still considered a taboo which obstructs a meaningful conversation on ‘period poverty.’ Without which, many girls and women who cannot afford sanitary products have no choices other than missing school or work, perpetuating the vicious circle of poverty. 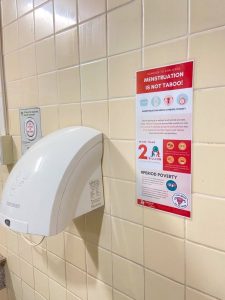 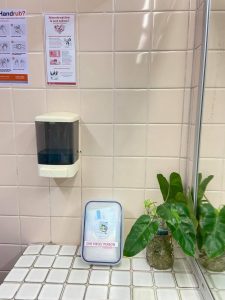 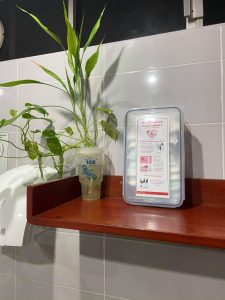 According to India’s Ministry of Health, only 12% of women and girls in India have access to sanitary napkins. The same situation is also observed in Kenya where, according to the ZanaAfrica Foundation, over one million girls have to miss up to six weeks of school each year because they don’t have reliable access to menstrual products.

To tackle period taboo and end period poverty, many governments have already begun to provide freely or cut tax on pads and tampons. For example, in 2018, Scotland became the first country in the world to make feminine hygiene products available for free in schools, colleges and universities. Many countries including Ireland, Jamaica, Nicaragua, Nigeria, Tanzania, Lebanon, Canada, India, Malaysia and USA have removed tax on sanitary pads and tampons. This year, New Zealand will make menstrual products available in all schools in the country’s Waikato region.

Ms. Guo Jiayu, a Chinese student of Gender Development Studies (GDS) from School of Environment, Resources and Development (SERD), who plays a leading role in pushing the campaign forward, explained that she was inspired by a similar activity in her hometown. She said last year in China, there was a movement to fight ‘period poverty’ which refers to the global issue involving lack of access to safe and sanitary period products and stigma of menstruation experienced by women of all ages. They set up sanitary pad dispensers in schools and colleges restrooms across China.

“I think AIT could have a campaign like this on our campus. We have women from different regions, and we can raise awareness of this issue, and also allow women to talk freely or exchange their experience of the period taboo,” said the lead campaigner, Ms. Guo Jiayu.

‘Menstruation is NOT taboo’ was organized by SU Gender and Culture Committee. Ms. Panchanok Prakobsuk, Chair of the Committee, said free sanitary pads would be available in all 14 lady’s rooms across the campus for the entire month of March. Female members of AIT community are welcome to use the free pads or to donate some.

In support of the campaign, SU President Mr. Warrapol Thawilapwattana said: “SU introduced the campaign ‘Menstruation is NOT taboo’ to commemorate International Women’s Day 2021 and to join the global driving force in raising awareness of gender inequality to the AIT community. AIT is a diverse society with students coming from 50 countries around the world. We would like our women to be heard, our men to understand the problems, and together make a difference.”

AIT Student Union hopes that people will understand that menstruation is natural, that it is not a stigma, and that women should not be ashamed to talk about it.