In January 2021, Thailand was grappling with the new wave of COVID-19 outbreak which started at a seafood market in Samut Sakhon province, where reportedly there were more than 400,000 documented and undocumented migrant workers – the majority of whom were from Myanmar. With 200 new infections every day, many workers had lost their jobs due to stricter restrictions imposed. While the issues of lost income and access to coronavirus testing and treatment for the migrant workers have been raised, what remains missing from the conversation is the welfare of the children who follow their migrant parents to Thailand – does the public even know they exist? And what can childcare arrangements of the migrant workers in Thailand tell us about Gender Equality? 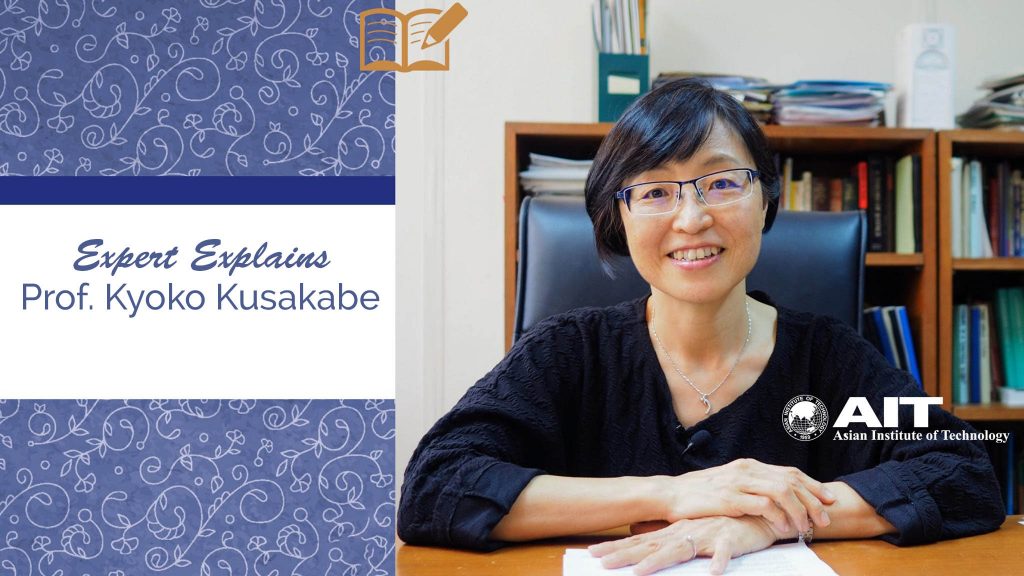 The expert who can best explain this is Prof. Kyoko Kusakabe, professor of Gender and Development Studies at Department of Development and Sustainability, School of Environment, Resources and Development (SERD), AIT.

Q: In Thailand, it is quite common for people to leave their children in the care of their relatives as they migrate from the rural areas to work in the city – do you find that similar to the situation of migrant workers from Myanmar?

A: Yes. Many Myanmar workers do leave their children in the place of origin when they migrate to work in the city or to other countries. However, that is not always the case. Not all workers have relatives back home who they can rely on. Many people in the rural areas have difficulty in life themselves, and are not able to accommodate more children to look after. Some workers do not want to part with their children.

Q: What do you find as a common practice or strategy for childcare arrangement adopted by migrant workers in Thailand?

Q: What did your study find as the challenges for childcare arrangements faced by migrant workers, particularly the women?

A: There is still a myth that grandparents are always available to look after grandchildren while the parents work. For many workers, that is not always the case. There are little public childcare options available both in Thailand and in Myanmar. In Myanmar, there is a law that requires factories to have childcare facilities. However, there is hardly any factory where migrant workers work that has functioning childcare facilities. In Thailand, there is low trust in public nurseries. This creates a vicious circle – nurseries quality is not good, so workers do not leave their children in nurseries, so there is less demand for nurseries, so number and quality of nurseries do not improve.

Q: Are women still expected to rear the children as they migrate for work? What does it tell us about gender equality?

A: With limited childcare options, and a strong social expectation that mothers should look after children, women have difficulty in juggling work and childcare especially when she is working in low paid job with long working hours. In our study, we have met migrant women who have to quit their job to look after their children since they could not find any alternative. She had to forfeit all her wage increase that she was able to gain through long years of working in the factory. If she is to go back to the factory job, she needs to start from the lowest wage.

Since the social expectation that mothers should look after children is very strong, women internalize such values and do not demand that others should also help in childcare. It is rare that migrant women perceive that they are entitled to childcare support. We need to change such social expectations, so that not all the responsibility of children falls on women.

Q: What is the current policy in place for the children who travel with migrant workers? If it does not exist yet, what should it look like?

A: There is no provision for children of migrant workers from neighboring countries under MoU or other registration to accompany their parents. There are possibilities that children born to these migrant workers become stateless, since children cannot be registered as Thai, and need to be registered back in Myanmar. If the parents are not able to do so, they will become stateless.

And those left behind may not be just a few, but unimaginably large number. The International Organization for Migration (IOM) estimated that there are four to five million migrant workers in Thailand, employed in construction and food and beverage sectors, among others. It is believed that 200,000 of them had left for their home countries after losing their jobs during the first wave of the pandemic in Thailand.

Prof. Kyoko Kusakabe recently gave talk on ‘Migrant workers and Childcare in Thailand and Myanmar’ at an event organized by the Gender and Impact Studies Centre (GISC), Impact and Policy Research Institute (IMPRI), Delhi Post News and Gen Dev Centre for Research and Innovation on January 20, 2021 to provide insights on the issues.