Climate Change and Water – road ahead with world’s influential scientists

Two AIT professors listed as the world’s most influential climate scientists share their journey towards a water-secure world as they discuss the issues of water – then, now, and in the future. 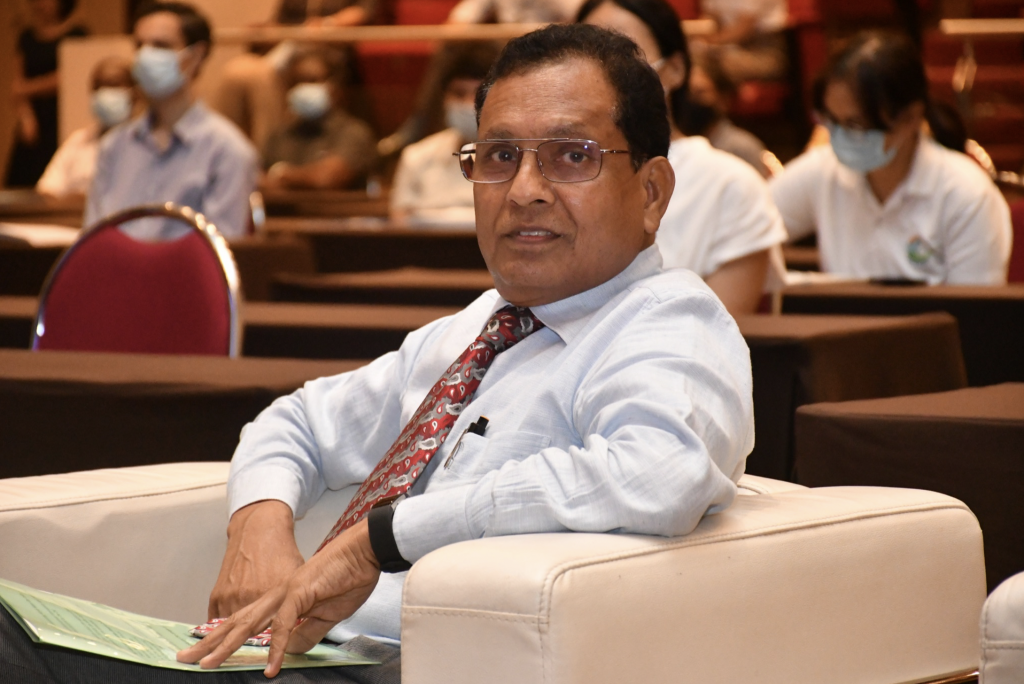 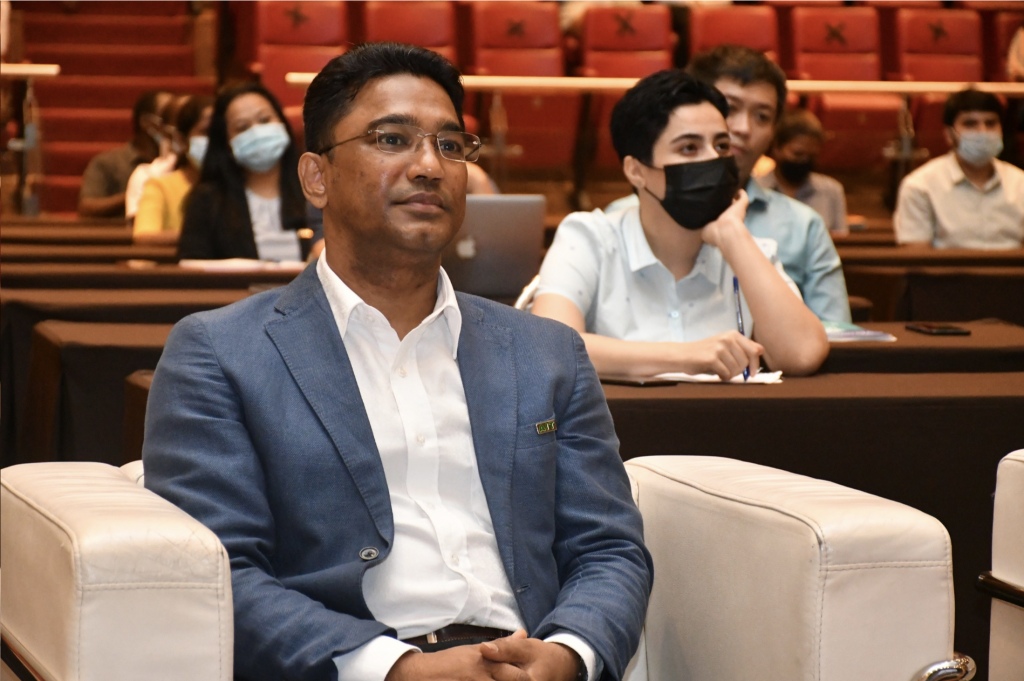 On the subject of influence, we hear from the influential scientists about what have influenced them to embark on and excel in their career as they work towards a water-secure world.

“AIT started in 1959 with a water program,” said Prof. Babel as he recalled his journey on water resources and the climate change path. As economic development was top on the agenda for the region at the time, the first water program at AIT was ‘Hydraulic Engineering’ focusing on infrastructure development including constructions of dams; irrigation canals; and water supply projects.

From hydraulic constructions, in the 1980’s, the focus was shifted to water science. When Prof. Babel joined AIT in the 1990’s, as a PhD student, the main thrust of the water program was ‘Water Resources Engineering’ which introduced water management concepts into education and research. It wasn’t until 1999 when Prof. Das Gupta and Babel started ‘Integrated Water Resources Management’ (IWRM) program which not only approaches water management from engineering perspective, but also from governance; economic; and social aspects of water.

The IWRM program was the first of its kind offered in the region, which later became a model for many national universities and for government development programs around the region. It was this program that caught the attention of a young student from Nepal.

“I was looking for something related to water resources management, and I saw that AIT was offering this program called Integrated Water Resources Management, so I got interested,” said Prof. Shrestha who was accepted into the program on a scholarship from AIT in 2002.

Working on the complex ‘Hydrological and Agricultural Nonpoint Pollutant Source’ model, the then IWRM student Prof. Shrestha was evaluating management practices to reduce nonpoint source pollution into the water resources systems, before shifting his focus to climate change.

Around that time, ‘climate change’ had started to pose itself as a challenge to water management. Again, AIT was the pioneer on the subject, connecting the studies of climate change with water.

With global warming caused by greenhouse gas emissions, studies have shown that the climate began to change, impacting the hydrologic cycle. The first PhD research of Prof. Babel’s student (Dr. Devesh Sharma from India), connecting climate change with water resources, was looking at Ping and Mae Klong River Basins in Thailand between 2004 – 2007 – downscaling ‘Global Circulation Model’ or GCM precipitation for assessment of impact on water resources. One of the findings was the elongated rainy season which has been noticed nowadays. The research on climate change and its impact on water resources took roots at AIT from hereon.

Meanwhile, Prof. Shrestha was working on how climate change impacts ‘components of the water cycle’ such as rainfall; evaporation; groundwater recharge and so on, as he was pursuing his PhD in Japan.

Since then, it has become a well-established fact that climate change is affecting water resources. Prof. Shrestha has noted on how more advanced technologies and knowledge help improve the tools and techniques for climate and impact modeling and studies – advancing the understanding of climate change impact on water resources and water use sectors.

In 2009, the WEM program at AIT started offering a course on ‘Climate Change and Water Resources’ with a new hire - Prof. Shrestha, teaching the course.

“This gives a lot of satisfaction to me, especially when he’s the youngest professor among my 200+ students who graduated with me, it gives me a lot of pleasure and happiness,” said Prof. Babel. 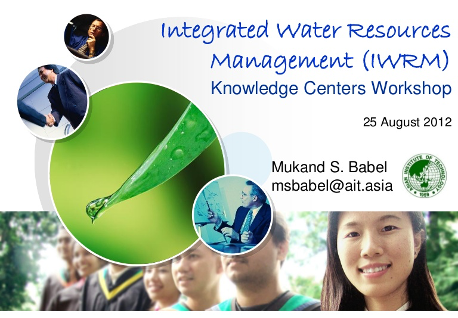 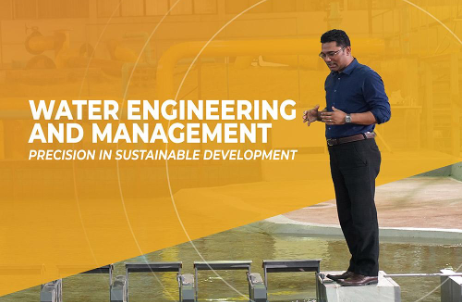 Translating global information to local level, which is more actionable, the focus of the initial studies has been centered towards the ‘impact’ such as climate change impact on hydrology; on water resources; on water availability; on extremely events such as floods or droughts; and on water use sectors -- for example, climate change impact on agriculture or on municipal water supply.

The wealth of knowledge accumulated since the studies of climate change and water began about 15 years ago is evident in over 120 masters and PhD theses produced to date at WEM in this area. 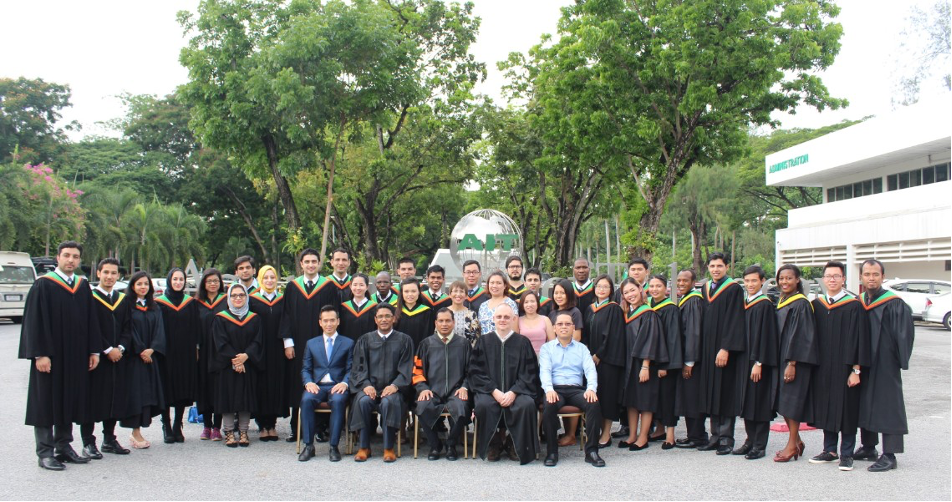 In addition to teaching and conducting research, the two professors are reaching out to wider communities with centers and projects that look at water and climate change issues in years to come. Below are few of the key projects and initiatives.

In 2013, AIT became a member of Climate Technology Center and Network (CTCN) led by UNEP and UNIDO. The consortium comprises 11 members across the globe to connect countries to climate technology solutions. The CTCN promotes the accelerated transfer of environmentally sound technologies for low carbon and climate resilient development at the request of developing countries.

In 2015, a “Regional Forum on Climate Change (RFCC) - Low Carbon and Climate Resilient Societies: Bridging Science, Practice, and Policy”, from 1st – 3rd July 2015 was jointly organized by AIT; French Ministry of Foreign Affairs and International Development; ASEAN secretariat, and the European Union. First, it aimed to create a platform for engaging a variety of stakeholders from the ASEAN region in discussions on climate change related agenda in order to ease the translation of science into practice and policy. Second, it aspired to assist negotiators, policy makers and high-level advisers from ASEAN to benefit from the results of contemporary scientific research to carve climate change related policies in the long term, as well as to offer ASEAN negotiators a venue to build positions of increased ambition prior to the COP 21 in Paris.

Later in 2016, the Climate Change Asia Initiative (CCA) to build capacities of developing countries in Asia and the Pacific to access, mobilize and manage climate finance from various sources with a focus on the Green Climate Fund was taken up at AIT.

In 2016, an international conference on “Water Security and Climate Change (WSCC)” was organized at AIT with support from DAAD, Germany. This conference since then has become an annual event with the following events taking place in Germany (2017), Kenya (2018), Mexico (2019) and Vietnam (2021).

In 2020, AIT signed a memorandum of understanding with the United Nations Framework Convention on Climate Change (UNFCCC) with the purpose to support capacity-building for MRV and transparency with a specific focus on adaptation reporting. This year, AIT will conduct a one-week virtual training program on “water-centric adaptation” for government officials from the Asia and Pacific. In 2022, AIT will host a 3 to 4-week training program for 25 – 30 participants, with a primary objective to enhance the technical knowledge of national experts from developing countries on the science, methods, and tools necessary to conduct vulnerability and adaptation (V&A) assessments.

More recently, in May 2021, a new center ‘Global Water and Climate Adaptation Center’ under the DAAD-funded “Global Water and Climate Adaptation Centre: Aachen – Bangkok – Chennai – Dresden (ABCD)” project was awarded to a consortium consisting of AIT, RWTH Aachen University, Indian Institute of Technology Madras (IITM), Technische Universität Dresden (TU Dresden) and United Nations University – Institute for Integrated Management of Material Fluxes and of Resources (UNU-FLORES). The objectives of the ABCD project are to conduct research on water security and climate adaptation, to educate responsible future environmental leaders, and to enable the transfer of research results into practice and policy in South Asia and Southeast Asia.

ENhancing ResiIienCe to future Hydro-meteorological extremes in the Mun river basin in Northeast of Thailand: ENRICH research project is being implemented since September 2018 for 3 years with support from the National Research Council of Thailand (NRCT) and the Natural Environment Research Council (NERC) of the UK under the Newton fund program. The University of Exeter, UK is our research partner. The aim of this project is to establish a strong collaboration and exchange of knowledge between the University of Exeter and AIT, to develop innovative integrated solutions to address the pressing problem of hydro-meteorological extremes and adaptation strategies and measures in the Mun river basin of Thailand.

Connect Mekong is a project that connects issues of Climate Change, Hydrology and Fisheries for Energy and Food Security in Lower Mekong Basin, covering 3S rivers: Sekong river in Laos, Sesan river in Cambodia, and Srepok river in Vietnam. It aims to assess climate change impacts on river flows, dam development and operations, and fish habitat to reduce future risks to energy production and food security with support and collaboration from USAID, SEI, ASU and IFREDI.

A web-based Water Security Assessment Tool (WATSAT) for cities will be launched later this year. This will be followed by capacity building activities for government officials in Nepal, India and Vietnam. This project is financed by the Asia-Pacific Network for Global Change Research (APN) – a network that engages governments, research institutions, scientists, and practitioners across member countries.

Working towards a water-secure world, the two professors and Reuters Hot List’s influential climate scientists acknowledge the challenges that still exist, namely better connection and understanding among policy makers and communities on the ground. Their journey continues and more news from them will be updated along the way. 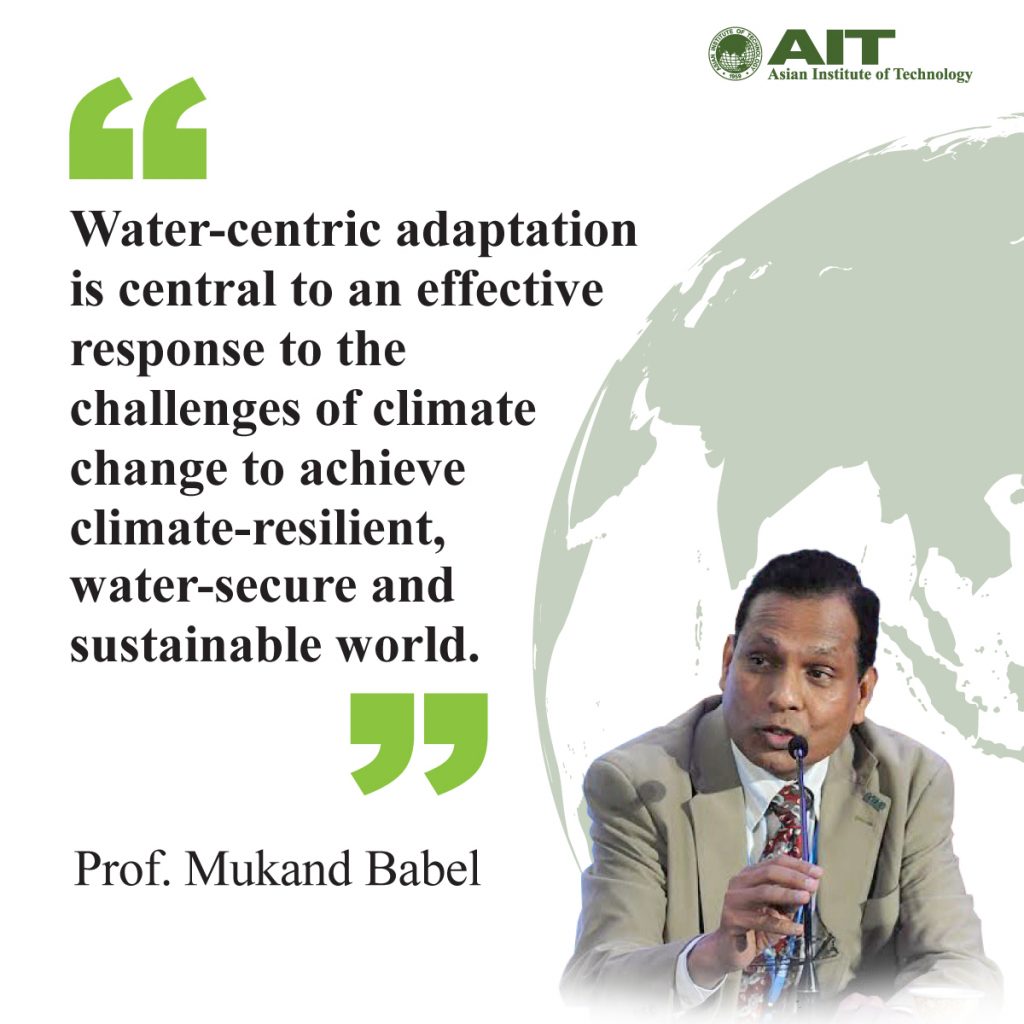 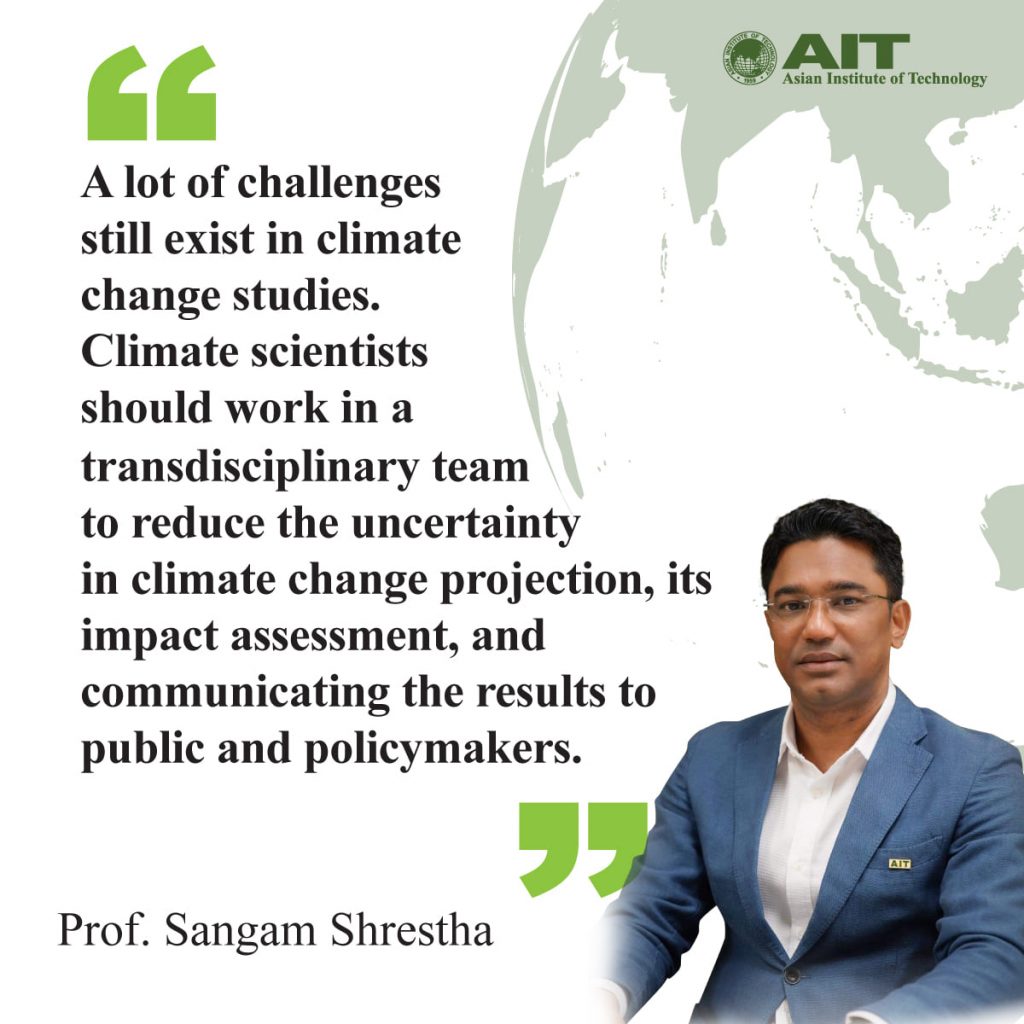