November 8, 201 – At the world’s annual biggest UN climate change conference in Glasgow, Scotland, the Asian Institute and Technology (AIT) joined its global partners at the Water Pavilion to raise awareness on the role of water in support of the science-based global climate action.

The 26th Conference of the Parties or COP26 was held on Nov 1st – 12th, 2021, and was attended by over 100 world leaders and over 20,000 attendees. By the end of the conference, it was reported that over US$450 million was announced for “locally-led adaptation approaches”, and the Adaptation Fund raised a record of US$356 million in new pledges. But are countries ready for adaptation?

Responses to climate change are generally categorized into two approaches: “mitigation” which deals with greenhouse gas emissions and “adaptation” is about water. Regardless of the uncertain future emissions, adaptation is the certain endeavor that is urgently needed. Ahead of the COP26, a series of technical trainings to build adaptation capacity for developing countries in the Asia Pacific, Latin America and Caribbean, and the African regions was launched by the Climate Action and Support Transparency Training, or CASTT Adaptation Academy. The training was aimed at assisting countries in delivering commitments to the Paris Agreement in the assessable and transparent manner. 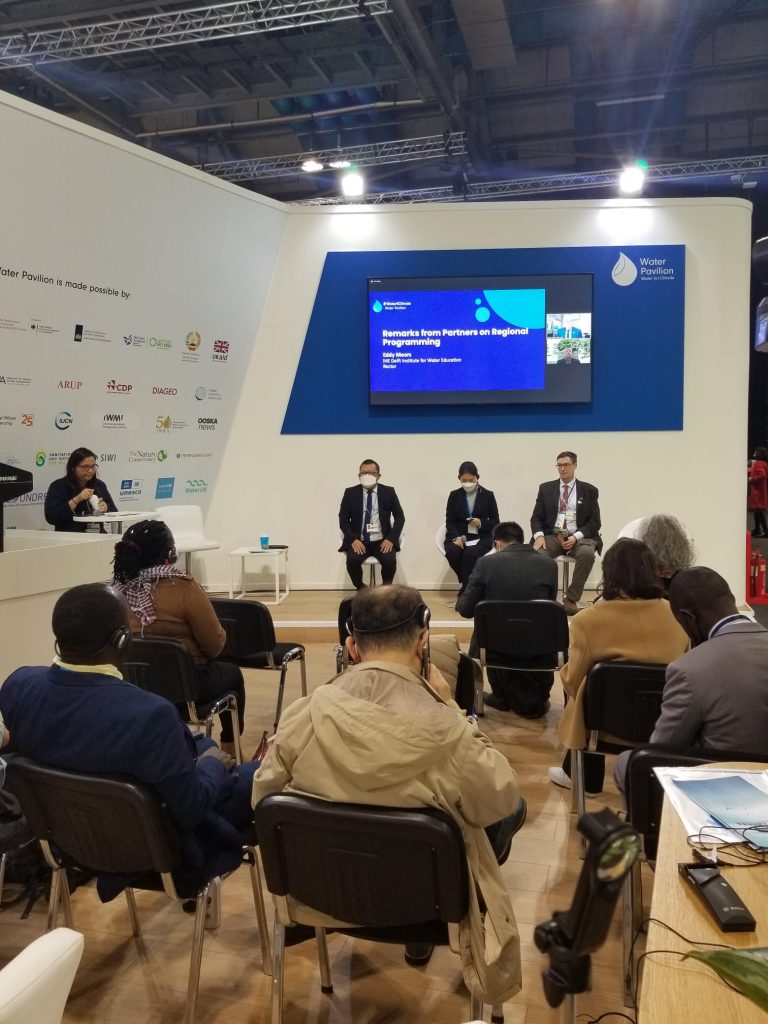 For the first time since the Conference of the Parties (COP) was established in 1994 by the signing of the UNFCCC, the first-ever Water & Climate Pavilion was debuted at the COP to mobilize the water community and partners in the global climate action community – in hybrid mode. As one of the partners and members of the water community, the President of AIT Dr. Eden Woon, represented the institute virtually with a “call for investment” in capacity building initiatives on climate adaptation.

Addressing the global participants and water community, President Woon said, “the need of the hour is to devise adaptation strategies and plans specific to regional challenges, addressing a multitude of climate change related issues like weather extremes, increased floods and droughts, wildfire, cyclone etc., and their impacts on all spheres of human and natural systems.”

To highlight the importance of the adaptation and the need for capacity building to turn words into action, activities at the Water Pavilion included testimonials from the participants who received training from Adaptation Academy. It was clear from the testimonials that climate change needs to be embedded in the whole planning cycle of different ministries of the national governments – and the Adaptation Academy provides the tools for that with real case studies provided by partners.

“What I loved the most in the five-day course was actually the climate risk assessment,” said France Dacumos, a Development Management Officer at the Climate Change Commission in the Philippines, adding that “I find Korea’s M&E (monitoring and evaluation) process eye-opening because it just shows that there is a range of methodologies and practices a country can employ in tracking adaptation progress.”

Click here to see activities at the multimedia Water Pavilion located in the Blue Zone of COP26.