COP26 – Where do we go from here: AIT Faculty Experts Analysis

Nov 22, 2021 – The Asian Institute of Technology (AIT) held a webinar to provide an analysis of the outcomes of the world’s biggest climate change conference COP-26 with five faculty experts in climate change related fields as the panelists and the Vice President for Academic Affairs as a moderator. 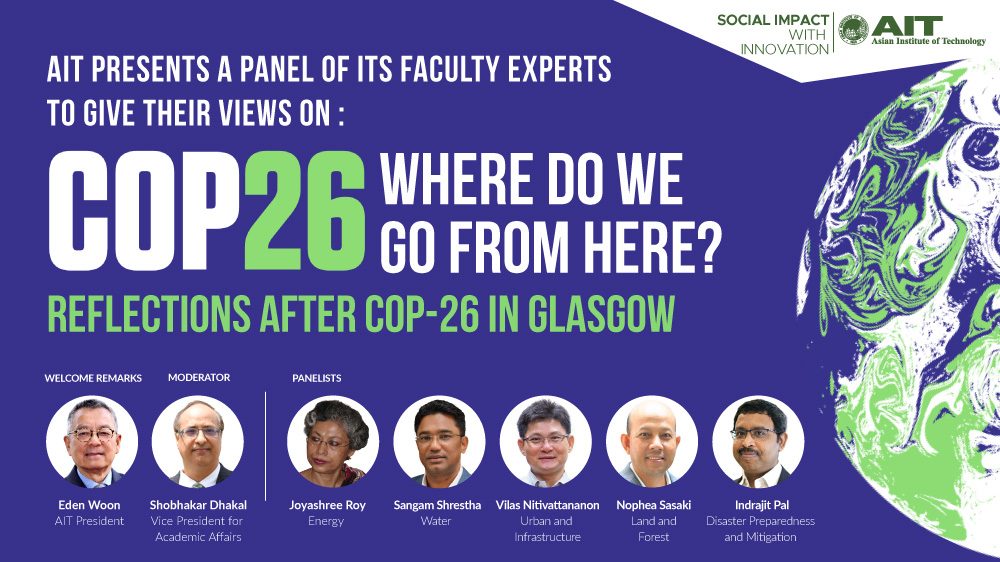 Earlier in August this year, the IPCC Working Group released a report dubbed as ‘code red for humanity’ with evidence showing human-induced climate change is widespread, rapid, and intensifying. The highly anticipated 26th Conference of the Parties (COP-26) was held in Glasgow, Scotland, on November 1 – 12, 2021 to determine the future of the planet – the only home to the human species. What should we make of the agreement that is the result of the twelve-day negotiation?

Coordinating Lead Author of the IPCC’s Sixth and Fifth Assessment Reports and AIT Vice President for Academic Affairs, Prof. Shobhakar Dhakal, led a panel of discussion on ‘Reflections After COP-26 in Glasgow: Where Do We Go from Here?’ with AIT faculty experts in the fields of Energy, Land and Forest, Urban and Infrastructure, Water and Disaster Preparedness and Mitigation. Offering a well-rounded assessment, the panelists on the whole agreed that much more work is needed to meet the goal.

What did we achieve with COP-26?
Overall, the panelists concurred that COP-26 is a story of success on many fronts, but it’s also a matter of expectations. With the goal of keeping the temperature rise below 1.5℃ in this century, the energy economist Prof. Joyashree Roy, also the coordinating lead author of the IPCC reports, acknowledged that for the first time in global climate talks, political leaders have agreed that fossil fuel subsidy needs to be reduced and that coal phase down is really needed.

Forest and Land expert, Prof. Nophea Sasaki, noted that the 144 countries - representing about 3.5 billion hectares of forest at COP-26 - have agreed to stop deforestation and to restore all degrading land by 2030 is “a very big success in our field.” While Prof. Vilas Nitivattananon, Urban and Infrastructure expert, highlighted that there was some good progress seen in enhancing local capacity, participation, and effective implementation for urban and infrastructure to adapt to climate change.

Another landmark result from COP-26 was stressed by Prof. Sangam Shrestha, water expert, noting that for the first time, “mitigation” (which deals with greenhouse gas emissions) and “adaptation” (which deals with water) were treated equally to address the issues of climate change. Equally important is the issue of loss and damage, which Asst. Prof. Indrajit Pal, an expert in Disaster Preparedness and Mitigation, explained that the actual operational plan has also been provided for the first time at COP-26, in addition to financial commitment.

Although Prof. Shobhakar Dhakal was of the opinion that the decision on loss and damage was rather too little too late, slow moving climate financial commitments, overall, the agreement of COP-26 is seen as a welcome move as the world needs to do more to stay in 1.5⁰C course.

Where do we go from here?
With climate change being accepted as a real danger, and decisions based on scientific evidence having led to landmark agreement and pledges, the climate minded faculty at AIT unanimously agreed that the way forward is to provide enhanced mitigation ambition, capacity building, and financing to help deliver climate promises, and knowledge partnerships to support evidence based actions.

What energy transition means for the developing world that is burning coal to catch up with the developed countries – previously burning coal until we got to this point of climate crisis, is support in financing and capacity building. Prof. Roy noted that it is clear from research by AIT that the capacity to implement energy transition in many of the countries in this region “simply does not exist.” It is merely enough to have technology or policy if there is no human capacity to implement them, added Prof. Roy.

On this note, professors in the fields of land and forest, urban and infrastructure, water, and disaster preparedness and mitigation supported Prof. Roy in prioritizing human capacity, in order to embed climate science and know-how into all areas of productivity. Each expert highlighted the courses, programs, and trainings offered at AIT.

The discussion ended on a positive note. By way of conclusion, the Vice President for Academic Affairs Prof. Dhakal stressed that climate change is driven by science -- if the policy is not backed by science, it will not help us to move forward. “That’s why the role of university is very important -- the role of AIT is very important,” Prof. Dhakal concluded, noting also that climate change is an integrated subject that needs to be addressed with the transdisciplinary approach.