December 7, 2021 -- The Geoinformatics Center (GIC) of the Asian Institute of Technology (AIT) has contributed to the disaster response and relief efforts following the volcanic eruption of Mount Semaru in the East Java province of Indonesia that killed at least 14 and displaced hundreds of people.

Mount Semeru is the tallest mountain on Java Island, which is the most populous island of Indonesia’s archipelago and home to the country’s capital city of Jakarta. It is one of almost 130 active volcanoes in Indonesia that regularly spews ash up to about 4,300 meters. On Saturday, December 4, 2021, Mount Semeru erupted and sent hot ash clouds and intense lava floods towards an East Java village. At least 14 people were reported dead, 56 injured, and 1,300 displaced, with hundreds of houses completely destroyed. Rescue efforts have proven difficult and dangerous amidst the risk of pyroclastic flows – a mix of ash, rock, and volcanic gases that can be more dangerous than lava, while the volcanic ash is as high as rooftops. 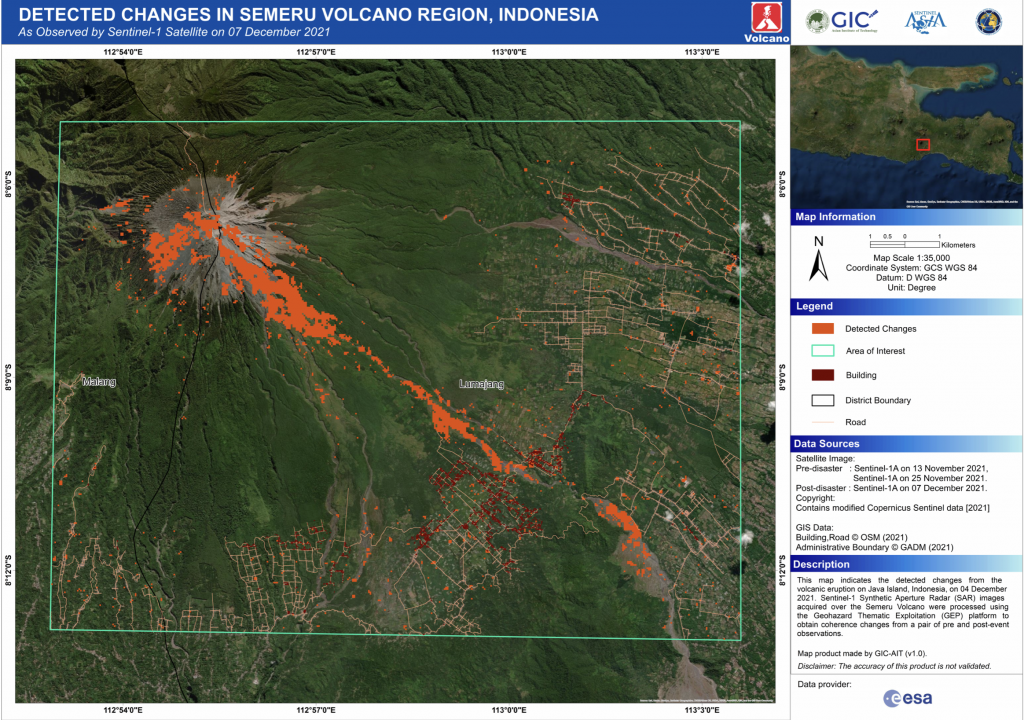 The Sentinel Asia and the International Charter Space & Major Disasters (the Charter) were activated by the Japan International Cooperation Agency (JICA), and GIC- AIT was nominated as the Project Manager. As the "Project Manager", GIC-AIT is coordinating with relevant stakeholders to effectively manage the activation, and at the same time, it also processes the post-disaster satellite data being acquired by various space agencies around the world. Since the volcanic eruption of Mount Semeru, GIC-AIT has uploaded a map to the Charter website, which shows the changes detected on the ground after the volcanic eruption. A few more maps have also been  shared by other agencies. “All these maps will be helpful to the response and relief efforts being undertaken at the ground level”, Dr. Manzul Kumar Hazarika, GIC-AIT Director, said.

The Charter combines Earth observation assets from different space agencies, allowing resources and expertise to be coordinated for rapid response to major disaster situations – thereby assisting civil protection authorities and the international humanitarian community. As a single access point, the Charter operates 24 hours a day, 7 days a week, at no cost to the user.

In 2021, GIC-AIT has contributed 25 map products to Sentinel Asia and 20 map products to the Charter. Noting the contribution of GIC-AIT, the European Space Agency (ESA) has expressed its willingness to collaborate with GIC-AIT to increase access and use of satellite data for Disaster Management and provide access to one of their newly developed cloud-based satellite data processing platforms called “Charter Mapper”.

It is also noteworthy that the current ESA Director General, Dr. Josef Aschbacher, was seconded as ESA Representative to the Asian Institute of Technology from 1991 to 1993, where he initiated major cooperation programs between the European Commission (EC), ESA, and Southeast Asia.