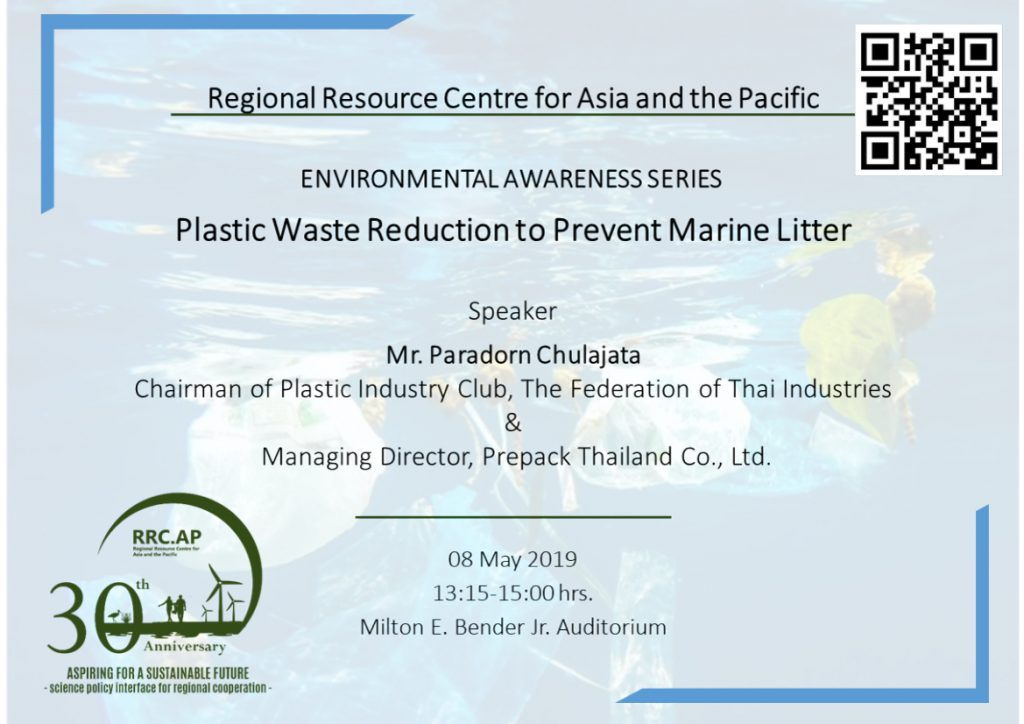 The Asian Institute of Technology, Regional Resource Centre for Asia and the Pacific (AIT RRC.AP) is organizing an awareness raising workshop on plastic waste reduction to prevent marine litter. The workshop promises an interactive, practical, solution-oriented session on “Communities participation in reducing marine plastic litter” as part of its 30th anniversary celebration.

Globally, marine plastic debris presents significant challenges and potential health risks to humans and marine habitats through the ingestion of plastic fragments and attached toxins by fish, seabirds and marine mammals. Over 80 per cent of marine plastic litter comes from land-based sources, making plastic the most common type of marine litter. 75 per cent of the leakages that comes from land-based sources originates from uncol-lected waste, while the remaining 25 per cent leaks from within the waste management system itself.

It is estimated that 95 per cent of plastic in the oceans is transported by 10 major rivers, eight of which are in Asia, and that Asian countries with fast growing markets and underdeveloped waste management systems – including China, India, Indonesia, the Philippines, Thailand and Viet Nam – may be responsible for as much as 60 per cent of plastic waste leakage. The workshop aims to highlight the collective responsibilities of consumer communities in contributing to reduce marine plastic litter.

Mr. Paradorn Chulajata is the Chairman of Plastic Industry Club, The Federation of Thai Industries and Managing Director of Prepack Thailand Co., Ltd., one of the top five flexible packaging manufacturers in Thailand. Since he personally joined Plastic Industry Club in 2003, he has been involved in several committees such as Thailand Bioplastic Development Committee, Ministry of Science, President of Sub-committee, National Skill Standards of Plastic Industry, Ministry of Labour, Member of Committee in setting up Plastic Institution of Thailand, Ministry of Industry, and Committee in Thailand Institute of Packaging and Recycling Management for Sustainable Environment, the Federation of Thai Industries.

Most importantly, he has played a major role in forming Public Private Partnership for Sustainable Plastic and Waste management in Thailand in June 5, 2018 which aims to reduce plastic waste into Thai ocean by 50% by 2028. Recently, he has also been appointed by National Environment Board to be a member of the Plastic Waste Management sub-committee in Thailand led by Permanent Secretary of Ministry of Natural Resources and Environment.