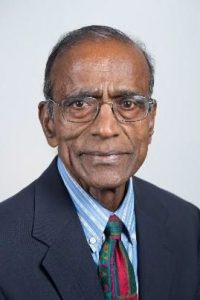 A talk on “Fusion of Hard and Soft (AI) Control Strategies for a Smart Prosthetic/Robotic Hand” will be delivered by Prof. Desineni Subbaram Naidu, Chair Professor of Electrical Engineering, University of Minnesota Duluth (UMD),USA, on 13 June 2019 (Thursday) from 13:00 – 15:00 hours in Room 106, ISE Chalermprakiat Building, Asian Institute of Technology (AIT).

There are now over 20 million people in the world with missing limbs resulting from combat and non-combat operations and by 2050 there will be 50 million amputees all over the world. The availability of artificial limbs will help these people to lead a better normal life. The overall goal of the research on Prosthetic Hand Technology is to develop a smart prosthetic hand using intelligent strategies for electromyographic (EMG) signal extraction, analysis, identification, kinematic synthesis, and embedded hierarchical real-time systems and control by fusion of soft computing and hard computing techniques.

There are no upcoming events at this time.